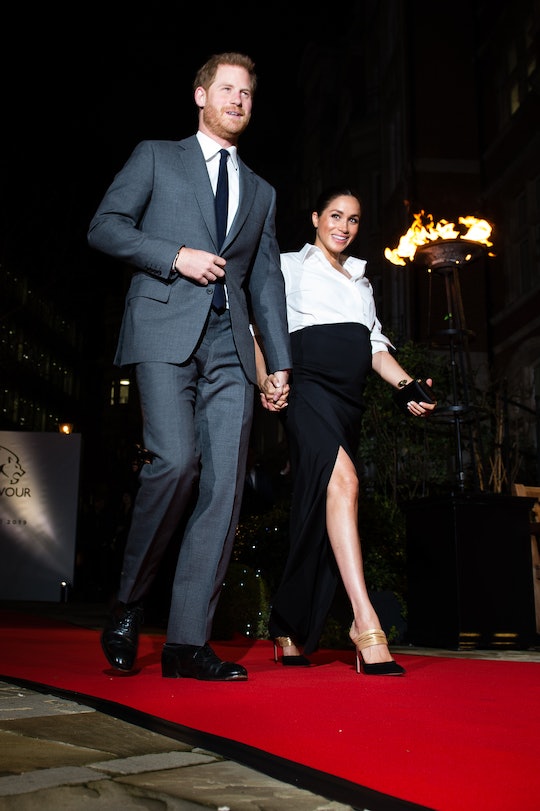 Fathers are known for their corny, not-so-funny jokes and it seems that not even princes are immune from the infection that is the "dad joke."In fact, Prince Harry's latest quote about his baby-to-be with Meghan Markle shows that he has fully retained his adorable and quirky sense of humor as he approaches parenthood. While handing out prices at the Endeavour Fund Awards on Thursday, the proud expectant parents often veered into conversations about their coming baby, and Prince Harry kept it humorous, as always.

Before the award ceremony, Prince Harry and Markle made the rounds, talking with nominees, participants, and supporters at a pre-ceremony reception, as People reported. During the reception, Prince Harry was reportedly overheard telling someone, “There’s a heavy baby in there!” referencing Markle's belly.

In a previous chat with the public, Markle revealed that she is due in April of this year. So, according to Parents, that puts her around 30 weeks at the time of the reception. At this point in the third trimester, the growing baby is about the size of a large head of cabbage and is steadily gaining about a half pound each week. So, yeah, I'd say that is a pretty "heavy baby: under Markle's chic maternity top.

Along with filling in those adorable chubby cheeks, the weight babies gain at this point helps to pad, protect, and insulate organs, according to Parents. The fat tissue will supply energy and help him or her — Markle and Prince Harry have shared that they are waiting to find out the sex at birth, according to E! News — regulate body temperature.

And if you're worried that Prince Harry's "heavy baby" comment offended his wife and soon-to-be mother of his child, don't be. According to People, Markle was overheard nearby saying, “He’s going to be the best dad,” while cradling her bump.

Chances are, Markle is all too familiar with Prince Harry's tendency towards humor. Even before the two of them got married, Prince Harry was joking about Markle. While at a ceremony to honor Britain’s fallen soldiers at Westminster Abbey’s Field of Remembrance in 2017, according to People, Prince Harry made a lighthearted comment to a veteran, Matt Weston who lost both his legs while he was serving in Afghanistan in 2009.

According to Travel + Leisure, Weston told reporters that he wasn't going to let the moment pass without asking about Markle: "I took the mickey and asked where his missus was and he said she wasn’t here. I asked if she would come next time because she’s awesome, and he said he couldn’t hide her anywhere — but I said you wouldn’t have to hide her."

Prince Harry certainly "couldn't hide her anywhere" now that Markle is expecting. The world can't get enough of her and that growing royal baby.

But it's me and a couple of his friends, and between the three of us, we'll make sure that we dig him in the ribs a few times and embarrass him. And make him lose some hair.

And that's not the only prank that Prince Harry pulled at Prince William and Middleton's wedding. He also played a pretty scary joke related to the couple's wedding cake, as Elle reported. Master chocolatier Barry Colenso — who created Prince William and Middleton’s chocolate tiffin cake — explained in the documentary Invitation To A Royal Wedding how Prince Harry's joke almost went terribly wrong. "We’d just finished the cake, and I remember Harry came bounding in," Colenso said. "Then he pretended to box with the top decoration. We were all like, 'Oh no!'" But, being the prepared professional he is, Colenso and his team had a backup cake on hand.

Prince Harry is quite the jokester, no doubt about that. And his humor will serve him well once his child makes his or her arrival soon. I can't wait to hear the dad jokes that are on the way.