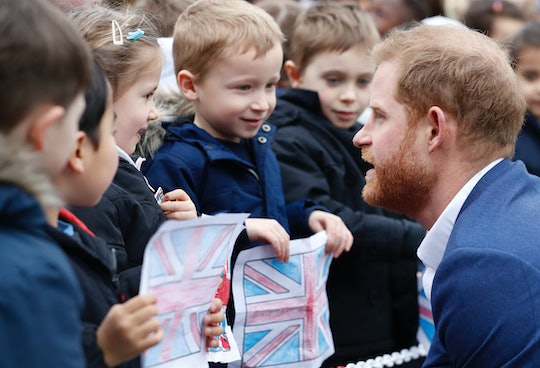 When I was a little girl, a member of the royal family came through our town. We stood on the side of the road waiting for this particular person to pass and all I could picture was Cinderella in her pumpkin chariot and her glass slippers. I was so excited until I saw a normal human drive by in a car and realized a princess was just a person. This is the way kids' minds work when they hear prince or princess... they picture a cartoon. Fortunately some royals get it, as evidenced by Prince Harry's reaction to being asked when the "real" prince would arrive. It was so empathetic, you just know he's going to make a great dad.

The Duke of Sussex was visiting St. Vincent's Catholic School in Acton, United Kingdom for a tree-planting project on Wednesday, according to the Daily Mail, and you know he loved it. He never lights up quite as much as he does when he gets to hang out with kids, except for possibly when he looks at his wife Meghan Markle, of course.

So as Prince Harry was crouching down to chat with some of the children, teaching assistant Philomena Frattura told People that one 4-year-old student, Emmanuel Osei, tapped him on the shoulder and said, "When is Prince Harry coming?"

The world famous prince reportedly explained that he was indeed Prince Harry, but that wasn't quite good enough. According to People, apparently the young boy said, "When is the real Prince Harry coming?"

Like the true gentleman he is, according to Hello! Magazine, the Duke of Sussex said: "I'm the real Harry. I've had my hair cut for the occasion."

Apparently the young boy finally believed him because they shared a nice little high five to celebrate.

You can't blame the young boy for being a little underwhelmed. After all, learning mentor at St. Vincent's Catholic School Diane Redmond explained to People, "They think he should have a crown."

I mean, I wouldn't hate that.

Back in 2016, Prince Harry admitted to People in an interview that kids sometimes have a hard time wrapping their heads around the idea that he's a prince because he doesn't fit in with their fantasy of what a prince should look like. Especially American kids.

"I'm worried because the American kids, especially next to Disney World, are going to be thinking, ‘You ain’t no prince, you ain’t dressed like a prince, you’re having a laugh!’" he told People at the time. "So I am going to pack a crown and a cape this time and some funny pointy-toed shoes. I’m going to sign the crown out!"

Prince Harry isn't wrong; all of those Disney movies definitely affect the way kids see the world, including the way they might expect a prince to look, according to Phys.org. But in the end, I think he always manages to win the kids over even without the crown because he's always so invested and engaged when he talks to children. Because at the end of the day, Prince Harry really is a prince among men.