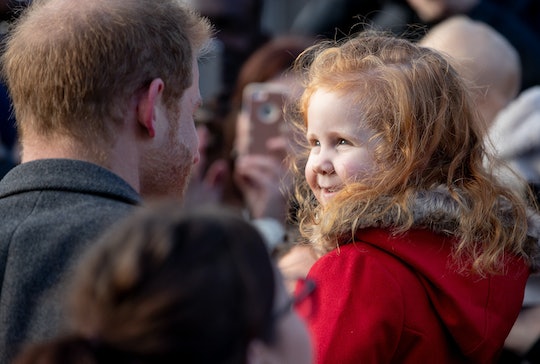 Oh that adorable Prince Harry. I think everyone can agree that they totally get what Meghan Markle sees in him beyond the whole royal family thing (which is, if I'm being honest, quite clearly a mixed blessing). He's one of those men who gives the impression of just getting it, you know? And now let's talk about what a great dad he's going to be, because watching the youngest son of Prince Charles and Princess Diana with children is like watching those kitten videos on YouTube for about six hours. Case in point; Prince Harry's reaction to this red-haired girl that will totally end you, it's that adorable.

Prince Harry and his wife Meghan Markle were out for an official royal walk through the British town of Birkenhead on Monday when they came upon a little fangirl. Which I'm sure happens all the time, given the couple are the Duke and Duchess of Sussex and basically the rock stars of the royal family and yes, I'm including Prince William and Kate Middleton in that category because I don't play favorites. In this case, however, 4-year-old Eliza Morris shared a certain famous trait of Prince Harry's: Her ginger-colored hair. And she is apparently so proud of her hair that she held up a sign that read "Gingers Unite!"

And so they did.

As seen in a video shared by The Daily Mail's royal correspondent Rebecca English, Prince Harry saw the sign that read "Gingers Unite - I love you Harry" and he couldn't stop himself from stopping for a chat. He reportedly asked little Eliza if she loved her hair and also said, "I love this! Your sign is amazing."

Then he gave her a hug, because he is already fully ready to take on his role as the most adorable father in the royal family. No offense to Prince William, of course, who appears to be a wonderful father to 5-year-old Prince George, 3-year-old Princess Charlotte, and 8-month-old Prince Louis. Poor Prince William just doesn't seem as though he's allowed to get too casual with kids, what with being the future King of England and all.

Prince Harry, on the other hand, has always been very hands-on with little ones when he is out on his royal duties. I mean, it was on that very same visit to Birkenhead when both he and his wife (who is pregnant and due in April so let's all please give her a little more credit since bending is way harder for her) crouched low to let blind children touch their faces, as per People.

I have a feeling I'm going to be a little disappointed when Prince Harry and Meghan Markle's baby arrives in April. Because they're presumably going to want a little privacy, which means their adoring public might not get to see some sweet moments with their little one.

Their fans will just have to use their imaginations, I suppose. And remember that special little moment when two sweet "Gingers United."