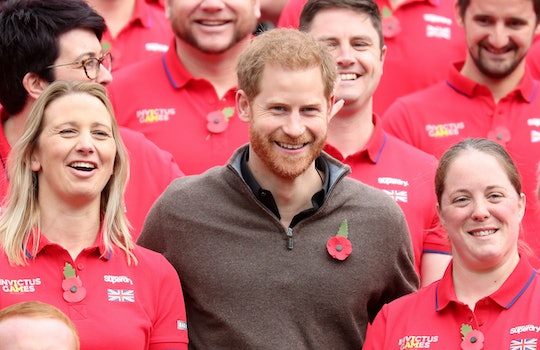 Imagine what it would be like to meet a member of the royal family, particularly one of the cooler members, like the Duke of Sussex. I think it's probably fair to say most of us would be pretty excited. And maybe some of us would get a little too excited, like one woman who accidentally got her hand stuck on "Prince Harry's bottom" at a recent royal event while they were posing for a photo. But don't worry, Prince Harry's reaction to the mishap was incredibly gracious, but probably no one should see that as an invitation for more of the same.

The royal dad was at an event on Tuesday to meet 65 athletes who will take part in the 2020 Invictus Games as members of Team UK. Prince Harry is the founder of the international adaptive sporting event for injured servicemen and women, according to the Royal Foundation. As an ex-military man himself, Prince Harry's vision for the Invictus game has always been a celebration of the indomitable spirit of injured athletes. He deserves a real pat on the back for his efforts.

Or a pat on the bum, apparently, as was the case on Tuesday with Invictus competitor Lynsey Kelly. When Kelly was posing for photos with Prince Harry and other athletes, she ended up with her hand pretty much "stuck on his bottom," according to an ITV News video of the moment.

The group of Invictus athletes were clustered around the Duke of Sussex, everyone with their arms around each other's waist, when Kelly can be heard saying, "My hand's just stuck on Prince Harry's bottom." She laughed nervously as people continued to pose because come on, you're not giving up a photo opportunity just because one of your fellow athletes accidentally copped a royal feel.

Prince Harry saved the day, however, but laughing himself and confirming Kelly was definitely in the bottom region by saying, "It's almost in my pocket."

As Kelly explained in an interview with ITV News after her big moment, Prince Harry was very kind about the whole ordeal. "We were just posing for a picture," she said. "My hands were around his waist. They might have been a bit lower down on his back than I would have preferred, you know, with him being a prince. He was very fine about it."

Prince Harry really goes that extra mile to support Invictus athletes, right? Although I notice the photo posted to the official Sussex Instagram page about the event is taken from behind, perhaps in an effort to protect his royal behind from accidental grazing.

Prince Harry is definitely one of the more laidback members of the royal family, in my opinion. I'm trying to picture any of the other members simply laughing off a light accidental hand-on-the-bum moment and... well, it's difficult to picture, of course.

Also please no one do that ever on purpose because we have laws in place for regular folks and royals alike, this was only funny as a genuine accident.