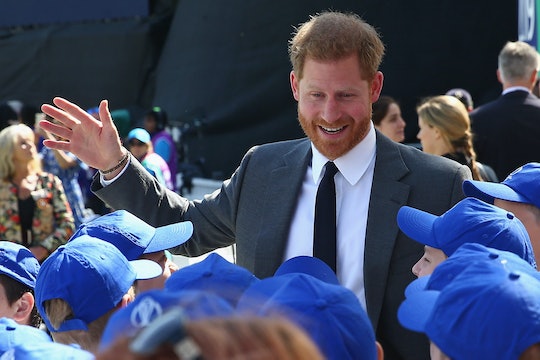 Prince Harry welcomed his first child with wife Meghan Markle in May, and his life hasn't been the same since. The duke has been busy balancing fatherhood and royal duties, and while that may seem chaotic it appears he's doing it masterfully. Prince Harry is "really, really happy" since welcoming Archie into the royal family, according to close friend Nacho Figueras. The Duke of Sussex hasn't exactly made that a secret, but it's still sweet to hear his pals gush about fatherhood on his behalf.

The professional polo player told PEOPLE he's thrilled Prince Harry is finally a dad. He added that his good friend has always liked kids, and been great with them, suggesting he's had paternal instincts for some time — at least as long as the pair have been friends. Figueras told PEOPLE that Prince Harry seems excited about his new role, and he's "not surprised" at all at how he's taken to fatherhood. He hailed the prince as an "amazing" dad, and while he's met baby Archie he didn't get into the specifics too much.

"He seems to be really, really happy so I'm very happy and excited for him," Figueras told People. "I've been saying this for a long time, he's a person that loves children. I've seen him interact with children for a very long time in all these things that we do in Africa so I'm not surprised he's an amazing father."

This is hardly the first time Figueras has had something to say about Prince Harry and baby Archie. After wrapping up a charity polo match in Rome, Figueras shared some kind words about his friend on Instagram. The Argentine athlete called Prince Harry "inspiring," amid criticism over the duke leaving his son for the night to appear at the match. Figueras said that he had "been fortunate enough" to spend a significant amount of time with Prince Harry over the last few years, praising him as "kind, generous, compassionate," and more. The athlete touted Prince Harry's work with Sentebale, his charity dedicated to helping African youths affected by HIV (according to its website). Describing his work, Figueras said the 34-year-old has spent so much time "talking openly about mental health, encouraging children or talking about climate [change] and all the things we all human beings need to change for the next generations."

"I see him do that over and over again and it is truly inspiring," he wrote on Instagram. "I am honored to be your friend and let's keep fighting because if we all fight together love always wins."

Figueras previously shut down critics of Prince Harry in an interview with HELLO!, telling the magazine that he's been a great father. He told the outlet his friend is doing a "find job," adding that a night away is no big deal. He also called Harry "a wonderful father" in the interview.

"I am a father of four and sometimes duty calls, this is 24 hours away from the house, I think he's doing just fine," he said, according to the magazine. "He's a wonderful father and very present and he's here for an amazing cause so I don't see it as a problem."

Everyone should be so lucky to have a friend that supports and uplifts them like Figueras has Prince Harry. Parenting isn't easy, and it's all the more difficult when people are critiquing your every move. Prince Harry and Markle, 37, are doing a find job raising their son — at least according to those around them. Fans will just have to trust that that's the truth and let them enjoy this journey together.