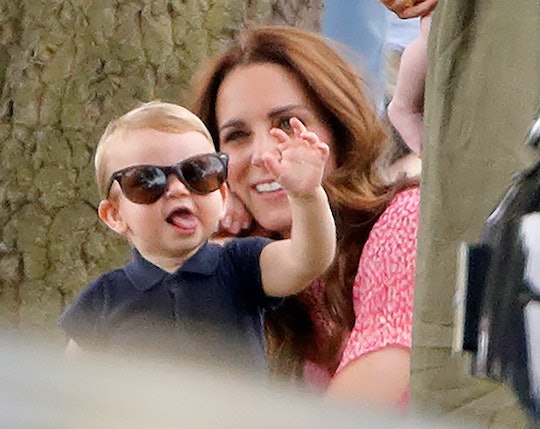 The Cambridge crew's littlest royal is turning one year older in just a matter of days. But how exactly will Kate Middleton and Prince William celebrate Prince Louis' second birthday? As they're all currently self-isolating at their country home and circumstances are quite different this year, it sounds like the Duke and Duchess of Cambridge may have some virtual plans in mind for their little boy.

During a recent interview with the BBC via video chat, Prince William and Kate Middleton revealed that during the ongoing coronavirus pandemic their kids have been staying in touch with family through the internet and video calls. "We have been talking to all of the family online," Prince William said. "It has been a really great way of keeping in touch."

Staying in touch with their loved one will, of course, be especially important in the coming days as several royal birthdays are just around the corner. For starters, Queen Elizabeth II turns 94 on April 21 and has already asked people across the United Kingdom who might normally celebrate the occasion together to sing "Happy Birthday" from their door steps, according to Hello! Magazine.

And then there's little Prince Louis, who will turn 2 years old on April 23. Rather than singing from doorsteps, it sounds like his parents are instead planning on connecting with family through video calls. "It's really hard times particularly over family times like Easter and things like that, and not seeing each other," Middleton told the BBC. "So, we are making sure we share in on birthday calls and make sure we keep in touch with each other."

As most parents of toddlers might imagine, the couple's youngest child doesn't necessarily get how these video calls work and Middleton admitted to the BBC that it can get "hectic. "

"With a 2-year-old you have to take the phone away," the mom of three told the news outlet. "It's quite hectic for them all to say the right thing at the right time without pressing the wrong buttons. But it's great and it's nice to keep in touch with everybody."

Of course, there's another big birthday coming up in the not-too-distant future as well; Meghan Markle and Prince Harry's little boy Archie will turn 1 year old on May 6. The Duke and Duchess of Sussex will celebrate their son's special day in Los Angeles, so thank goodness for video chat so all the royal kids can connect. And, who knows, if we're lucky, we might get to see a screenshot or two from these virtual birthday calls.