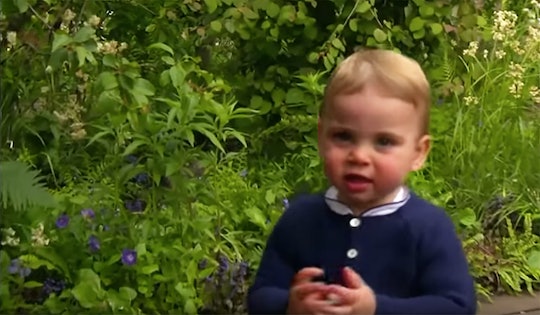 So, Prince Louis Is Already Walking Around Like A Toddler & Yup, There's Video

It seems like just yesterday that Prince Louis made his debut into the world, but in reality, the little guy celebrated his first birthday on April 23. Wild, right? But just when you thought the baby couldn't get any more grown up, this video of Prince Louis walking and stomping around surfaced Sunday. The youngest Cambridge sibling is already serving up major toddler vibes, folks.

Over the weekend, the Duke and Duchess of Cambridge released a video of their family enjoying the RHS Back to Nature Garden, an idyllic green space that was designed by Kate Middleton alongside award-winning landscape architects Andrée Davies and Adam White of Davies White Landscape Architects, according to Entertainment Tonight.

Prince George, 5, and Princess Charlotte, 4, appeared impressed with their mom's work, enjoying everything the garden had to offer, all the way from the rope swing to its small creek. But out of all of the siblings, no one seemed more enthusiastic than 1-year-old Prince Louis, who was walking (yes, walking) around the garden and hamming it up for the cameras.

Not only did the baby enjoy some fun on the rope swing (with the help of Prince William, of course) but in the beginning of the video, he is seen quickly hustling over to the camera lens for his close up. Too cute.

As for fan reactions to Prince Louis' latest milestone, there was plenty of disbelief to go around.

"Omg how has Prince Louis grown so fast?" someone tweeted. "He's so adorable and walking."

Someone else said: "Little Prince Louis walking around is EVERYTHING today."

"Prince Louis WALKING!!!!" another person commented. "And Charlotte and George looks so big and beautiful. What a beautiful family."

Prince Louis' active personality probably comes as no surprise to the royals' diehard fans, however. Earlier this month, for instance, Middleton revealed that he's very quick on his feet. “I turned around the other day and he was at the top of the slide — I had no idea!” she revealed, according to People.

Apparently, Prince Louis is a little force of nature that wants to be on the go 24/7. Middleton added, “Louis just wants to pull himself up all the time. He has got these little walkers and is bombing around in them.”

And back in January, the mom confessed to a photographer that a then 9-month-old Prince Louis was a "fast crawler," according to Hello! Magazine.

Yep, I have a feeling Prince Louis is set to give Princess Charlotte and Prince George a run for their money in the rambunctious department.

Of course, it's difficult not to think of Meghan Markle and Prince Harry's newborn son, Archie, when watching this video Prince Louis. Before you know it, baby Archie will be zooming around while the Duke and Duchess of Sussex scramble to keep up with him. Time flies by way too fast.

Although this adorable video might be bittersweet for some, I bet many fans can't wait to see the baby reach other milestones. Congrats on walking, Prince Louis.

More Like This
30 Adorable Baby Halloween Costumes, From Animals To Avocados
Experts Explain Whether It’s Safe For Your Baby To Sleep On Your Chest
The Difference Between The PICU & The NICU
20 Bridgerton-Inspired Baby Names