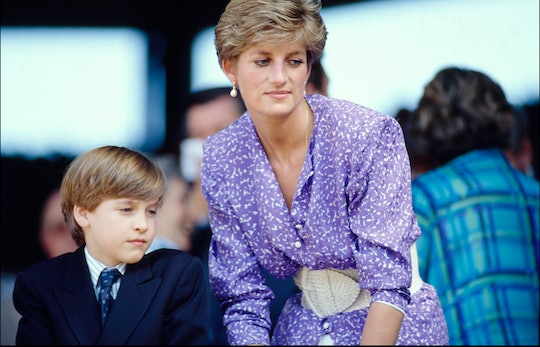 Parenthood changes a person in a myriad of ways, but it also can reconnect you with your past — traumatic or otherwise. This was the experience for Prince William, who admitted that Princess Diana's death really came back to him once he became a father himself.

The Duke of Cambridge took part in a new BBC documentary set to air on Thursday, May 28 called Football, Prince William And Our Mental Health. During it, Prince William chatted with soccer player Marvin Sordell about how he has changed as a person since welcoming 6-year-old Prince George, 5-year-old Princess Charlotte, and 2-year-old Prince Louis with wife Kate Middleton. "Having children is the biggest life-changing moment, it really is," Prince William tells Sordell in a video clip shared by Kensington Palace on Instagram.

The father of three went on to note that first becoming a dad in 2013 also brought back some pretty painful emotions from his own childhood, namely the loss of his mother Princess Diana who died in a car crash in Paris when he was just 15 years old.

"I think when you've been through something traumatic in life — and that is like you say your dad not being around, my mother dying when I was younger — your emotions come back in leaps and bounds because it's a very different phase of life," Prince William tells Sordell, who was speaking about his own difficulties raising his children after his own father left. "And there's no one there to, kind of, help you, and I definitely found it very, at times, overwhelming."

The Duke and Duchess of Cambridge have both worked tirelessly to help end the stigma of mental health issues through their charitable organization Heads Together. Prince William in particular has often been quite candid about his personal struggles with mental health over the years, especially as it pertains to the loss of his mom. For instance, according to the Daily Mail, in 2014 he became the patron of the Child Bereavement Charity and said at the time that "losing a close family member is one of the hardest experiences that anyone can ever endure." "Never being able to say the word 'Mummy' again in your life sounds like a small thing," he said. "I, too, have felt — and still feel — the emptiness on such a day as Mother's Day."

Fortunately for Prince William, his wife has become a real support for him when it comes to mental health and parenting. "Me and Catherine particularly, we support each other and we go through those moments together and we kind of evolve and learn together," he says in the documentary, according to CTV News. "But I think emotionally things come out of the blue that you don’t ever expect, or maybe you think you have dealt with."