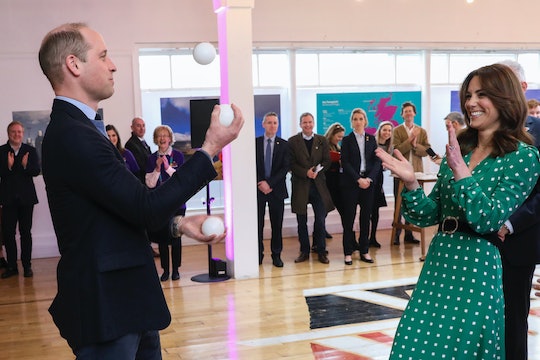 I guess there's nothing Prince William can't do, is there? He is the heir to the British throne and a former pilot. He can speak both English and French and juggle. That's right, Prince William can also apparently juggle pretty well and, oh yes, there's video of him showing off this special skill.

The Duke of Cambridge was on a royal tour of Ireland with his wife Kate Middleton on Thursday when the two stopped for an official visit to the seaside town of Galway, according to The Irish Sun. As is tradition with royal visits, Prince William and Middleton were treated to some local entertainment during a stop at a restaurant called Tribeton, as Hello! Magazine reported. The royal pair are in Ireland trying to reinforce the idea of a good relationship between England and Ireland with Brexit looking large ahead of them, as the BBC explained, and Prince William really seemed to be getting into the whole positive spirit of the visit.

Particularly when he was asked by one of the performers to try his hand at juggling. Actual juggling, mind you, not like juggling schedules or something along those lines. Someone a bit more feint of heart might have politely declined, but Prince William rose to the challenge — and pulled it off like a pro.

In a video shared by the Daily Mail's royal correspondent Rebecca English, Prince William can be seen juggling three balls at once as though he had been doing it all his life, although it should be noted that moments later he was unable to pull off the same feat with four balls. While the ability to juggle might not help him out a whole lot when he eventually becomes the King of England, it could very well help to keep his three kids, 6-year-old Prince George, 4-year-old Princess Charlotte, and 22-month-old Prince Louis, entertained for hours.

The three royal kids seemed to be top of mind for their parents on their tour of Ireland. When the Duke and Duchess of Cambridge popped by Teagasc Research Farm outside of Dublin, they met school children including 11-year-old Thaddeus, who told Town and Country: "They said they wanted to bring their kids over soon to show our projects. They said it’s very good to go outside and tell our friends to go outside." Maybe Prince William can try juggling outside as a one-two entertainment punch for his kids.