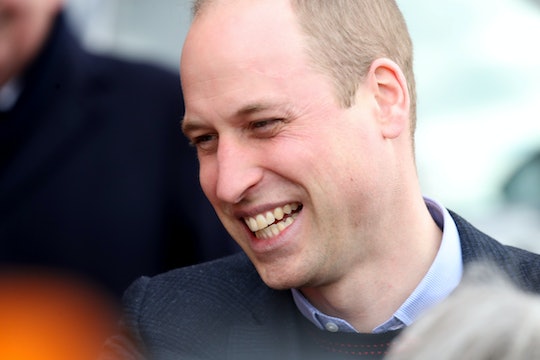 Like Many Dads, Prince William Struggles With Preschooler Ponytails

Few things in life are as sweet as watching my husband attempt hairstyling on our daughters. He's tried braids and updos, and occasionally triumphed (his high bun is a song). His quest to be an involved dad is shared by a leader of British monarchy, too: Prince William commiserated with another dad over styling their girls' hair. It just goes to show that parenting is never easy.

As People magazine reported, England's future king was touring a community park used as an outdoor preschool in Blackpool, England, and fell into conversation about 3-year-old daughter Princess Charlotte's hair, and how the job of a dad is never done.

"Never try to do a ponytail!" William reportedly told the other pop in attendance. "Nightmare." When his wife, Kate Middleton, followed up by asking the dad if he can do other styles, William gave a bit more info, joking: "I can do [Charlotte’s] ponytail, but that’s about it as I don’t have enough hair to practice on!" People added.

Best of all, according to Us Weekly, Prince William was told by the other dad that his hairstyling techniques improved after watching YouTube tutorials!

I'm just dying over the thought of England's crown prince being told to log onto YouTube for his hairstyling education.

If you've ever watched Netflix's The Crown, which is based on the true story of William's grandma Queen Elizabeth's early years on the throne, then you know that there is typically a lot of pomp, circumstance and seriousness attached to royal life.

Some of my favorite scenes between a young Elizabeth and her hard-to-tame husband, Prince Philip, involve them talking or even arguing while they are being undressed or having their hair brushed by a cadre of valets or maids, who clearly are not supposed to be listening to the action. It's so interesting.

That kind of thing makes you realize that old-school royals were not like you and me, given that they had people to help them robe and disrobe.

While we know that modern dukes and duchesses such as William and Kate and Harry and Meghan certainly get some personal help and buy beautiful wardrobes, they seem way more down-to-earth than royals of previous generations.

In fact, Middleton showed off her skills just days ago in Northern Ireland, with the Duchess of Cambridge helping braid a child's hair for a makeup class that was part of a film and theatre non-profit.

Clearly, today's royals are handy and generally not too different from the rest of us. Fans like me notice that Middleton recycles her designer outfits and takes portraits of her kids herself, even if she does have a nanny.

William admitted to this sea change in the royal family to British GQ in 2017: "If I look at my parents' generation, there was a lot more stiff upper lip going on ... Behind closed doors, in normal everyday life, we have to be more open and upfront with our feelings and emotions. "

Totally. And the Prince of Wales clearly relishes being a "normal" dad.

"I want George to grow up in a real, living environment, I don't want him growing up behind palace walls, he has to be out there," William added to British GQ. "The media make it harder but I will fight for [my kids] to have a normal life."

Every time I read about this family, I only like them more.

William's quest to be present for his kids and give them emotional support just makes him all the more relatable. Maybe he can come over here and offer some hairstyling advice to my hubby?