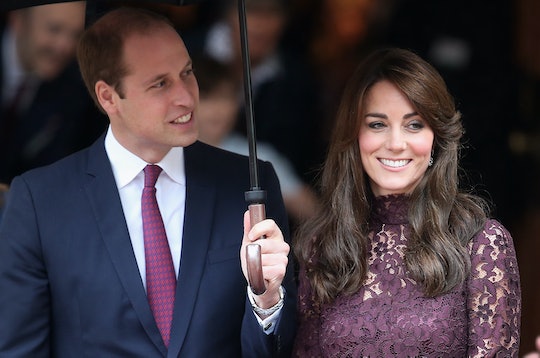 While living in the spotlight can't be easy, there are certain advantages. From being able to use your social media to influence others to getting free gifts and swag bags at events, being a public figure certainly isn't the worst thing in the world. However, being a member of the royal family is in a class of its own. Members of the British royal family must all adhere to a strict and specific set of rules, and so much of their lives are open to the public. But some things will and should remain private. But, now, with another royal baby on the way, Prince William dropped a hint that Kate Middleton is perhaps due sooner than expected. So, the question remains: How far along is the Duchess of Cambridge actually?

As reported by Glamour, Prince William appeared at the Spitalfields Crypt Trust on Tuesday, where he spoke to a midwife while learning about the East London charity. After being congratulated on his wife's third pregnancy, William joked, according to Glamour. "All the best with the midwifery. I may see you sooner than you think."

Wait, what? "Sooner than you think."

While no official due date has been announced, it's typical for the family to wait until the mother is three full months along before announcing. Considering that Middleton's pregnancy was announced on Sept. 4, many assumed she was due sometime around April 2018. Now, though, nothing is certain.

So, is Middleton due sooner than spring 2018? That much is still unclear. Previously, the Duchess has suffered from intense morning sickness, known as hyperpremesis gravidarum. In fact, back in 2012, the royal family was forced to announce Middleton's pregnancy sooner than they had planned due to her being admitted to the hospital with the condition. While it was never revealed how far along Middleton was at the time, all that was confirmed was that she was less than 12 weeks.

So now, it's certainly possible that Middleton's latest pregnancy was announced later than usual due to her medical struggles. And as Middleton has remained fairly secluded since the beginning of the month, it wouldn't be too surprising to learn that she's a little further along than assumed.

So, could the world be meeting Middleton's next little one earlier than April? It's hard to say, although considering the fact that Middleton's next public appearance isn't slated until Oct. 10, it will probably be a while until the public knows for sure. In fact, Kensington Palace might have actually decided to hold off on Middleton's public appearances until she was pregnant enough to not really be able to speculate whether or not she was, let's say, four or five months along.

However, it really doesn't matter when Middleton is due. At the end of the day, all that really matters is that Middleton and her future little one are healthy, and if that means she needs to lay a little low for a while, then that's totally fine. As lovely and charming as the royal family is, they don't actually owe us anything. And really, isn't it kind of fun not to know when exactly Middleton could be giving birth and be surprised on the day it happens?

So, whether Middleton is due in April, or March, or February, it's not really anyone's business but her own. And clearly, despite all of the medical and health issues she has faced, Middleton is still handling pregnancy like pure royalty, and that's pretty spectacular.