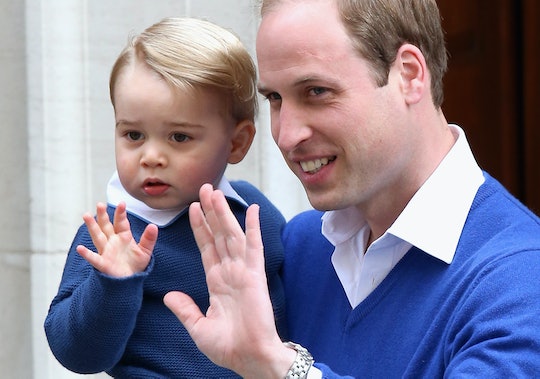 The Important Reason Prince William Got Emotional Discussing His Children

People like to slot each other into specific narratives. For instance, Prince William is the reserved brother while Prince Harry is the emotional one. I've seen it bandied about a few times, and I suppose it's sort of true that Prince William is in a very different position in the royal family. He will presumably one day be King of England, which is a pretty serious responsibility. Which could be why he tends to shy away from getting too emotional in public. Most of the time. During a discussion about mental health on Wednesday, Prince William got emotional discussing his kids for a pretty heartbreaking reason.

This week, the Duke of Cambridge was sitting in on a World Economic Forum discussion about mental health when the subject of his time as an Air Ambulance pilot in the early 2000s arose, according to Hello! Magazine. He was asked whether or not he remembered a particular time when he was working that stayed with him.

The father of three — 5-year-old Prince George, 3-year-old Princess Charlotte and 8-month-old Prince Louis — with his wife Kate Middleton appeared to get emotional for a moment. Then he admitted that yes, he did have something happen but that he "still finds it difficult to talk about," as Hello! Magazine reported.

He went on to explain that the situation he remembered actually ended up affecting his mental health... and even admitted that he "took action" to avoid going down a "slippery slope." According to the BBC, he said:

I get very emotional about it because it relates very closely to my children and so it is very hard to talk about it. And lots of people in the medical community have these particular cases where I don't think you ever get over it because you go through someone else's pain and you live with it. I know that if I hadn't taken the action that I did then, I would have definitely gone down a slippery slope and I would have been dealing with mental illness on a different level.

Prince William has made mental health awareness one of his greatest platforms in recent years, forming Heads Together along with his wife Kate Middleton and brother Prince Harry to end the stigma around seeking help. The future king discussed what he believes to be a long history in the United Kingdom of discouraging people to talk about their mental health that he believes goes right back to World War II, according to Town & Country.

But he wants to make sure the stigma stops before his children's generation is affected by it as well. "We should talk about it, we should get over it... This is a generational issue and we’ve got to start tackling it now so that our children and our grandchildren don’t have to go through this sort of process, and they can be more open about it," he said, according to Town & Country.

It can't imagine it's easy for Prince William to open up in public about his mental health, especially having grown up as part of the very private British royal family. But I think this is a testament to what a loving father he truly is, wanting to make sure his children always know it's OK to talk about your mental health.

I think it's a harbinger for brighter days to come.