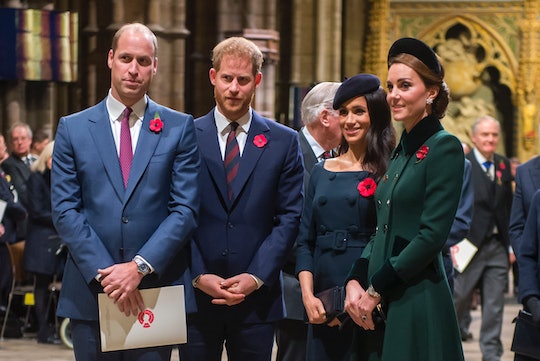 Ever since the world found out that another royal baby would be on its way via the womb of Meghan Markle, there's been speculation about every detail. The name, of course, the due date, the sex of the baby... and the godparents. Which is sort of weird when you think that the subject of godparents doesn't really come up in the usual way of things, but this is a royal baby so it's different. And now with the internet lighting up with rumors about the royal Fab Four, people might make a big deal out of the fact that Prince William and Kate Middleton probably won't be godparents to Meghan Markle and Prince Harry's baby. But everyone calm down; there's actually a pretty normal reason for the potential choice.

On this side of the Atlantic Ocean, aunts and uncles are regularly chosen to do double duty as godparents. In fact, my own godparents are an aunt and uncle. But in the royal family, the rules for godparents are slightly different. Prince William and Kate Middleton didn't choose siblings on either side of their family to be godparents to their three children, 5-year-old Prince George, 3-year-old Princess Charlotte, or 8-month-old Prince Louis. Prince Harry is not a godparent to any of their children, nor are either of Kate Middleton's siblings, Pippa or James Middleton. So going with someone other than a sibling is rather a precedent when choosing godparents in the British monarchy.

So don't go thinking it's a sign of anything terrible going on between the two brothers and their wives.

While Prince William and Kate Middleton probably won't act as godparents to the new little Sussex baby when he or she arrives some time in the spring, a possible couple have been pegged as front runners; Amal and George Clooney. The human rights lawyer and her actor husband have been named by multiple news sources, including Harper's Bazaar Australia, as the top picks for godparents to the new royal baby. But even if the parents of one-year-old twins are named, they most likely won't be the only ones chosen. Royal tradition dictates that five to seven godparents are chosen to help with the child's spiritual guidance, as royal expert Marlene Koenig explained to Town and Country:

Godparents are supposed to provide the spiritual guidance to their godchildren, at least for regular folk. But royal godparents have a different role — sometimes at a distance — sending a lovely present for their godchild’s birthday until adulthood – and a nice wedding present.

In the case of the Cambridge children, each of them have a smattering of godparents chosen from friends and family alike. And the same would most likely be expected for the Sussex baby... if they go with a godparent at all. After all, Meghan Markle has made a name for herself as being something of a dark horse when it comes to following royal tradition; she might choose not to have her baby baptized. It's highly unlikely, of course, but it's a possibility.

But if they do decide to baptize their baby and the Duke of Duchess of Cambridge aren't godparents, let's avoid making hurtful assumptions OK? I feel like that family has been through enough gossip to last them a lifetime.