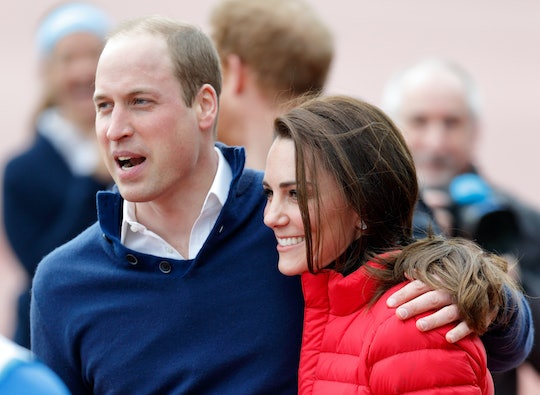 There has been a considerable amount written over the years about the lack of public affection shown by the Duke and Duchess of Cambridge. Sure, they're always laughing and teasing each other, but mostly people seem to want to see them hugging and holding hands more often. While Prince William and Kate Middleton don't often show PDA, when they do it's Downton Abbey-level tension for all involved. Maybe because it's such a rare sighting that even a slight elbow touch makes royal watchers like myself swoon from the understated romance of it all.

The parents of three were at a royal event on Tuesday in support of mental health text service Shout's Crisis Volunteer celebration event. Middleton and Prince William showed up at the Troubadour White City Theatre looking as professional and posh as ever, but then things got, dare I say, a little passionate?

As the Duke and Duchess of Cambridge greeted people at the event, Prince William reached out and touched Kate Middleton's back for all the world to see. He might have even given his wife's back a little rub. The whole scene was caught on camera by royal reporter Rebecca English; thankfully the couple have been married since 2011 and this particular PDA was within the acceptable guidelines for royal protocol, otherwise you might need to get out those smelling salts to revive me.

Just in case you didn't think Prince William touching his wife's back through her blazer was romantic enough, later on in the event Middleton went ahead and touched her husband's elbow while he had his hand on her upper arm at the same time. This was mutually beneficial PDA that has me clutching my pearls.

It should also be noted that Prince William didn't simply touch Kate Middleton's back once but several times; because once you've opened that PDA door it's hard to go back to the way things were before, you know? What's next, a hug? A kiss? Get a room, guys.

While these PDA sightings might be rare between the Duke and Duchess of Cambridge, they have happened before. There was that kiss on the balcony of Buckingham Palace after the two were married in April 2011, although that one felt a bit forced because the crowd was definitely letting it be known they wanted to see a little lip lock. Back in 2016, Middleton placed her hand on her husband's thigh during a welcoming ceremony on a trip to Canada, and in 2018 they even held hands at Princess Eugenie's wedding to Jack Brooksbank.

One of my personal favorite PDA moments happened at the London Olympics in 2012, when Prince William lifted Middleton in a celebratory hug after a big win for his country, as Hello! Magazine reported at the time. They were even wearing jeans.

These aren't the only moments when Prince William showed some very public affection for his wife, of course. He has been known to be a fan of keeping a hand on her lower back like some hot guy from a romance novel. I suspect this couple knows that it's the thrill of the wait that keeps us watching for the slightest touch. They probably watched Downton Abbey and every Jane Austen adaptation, too.