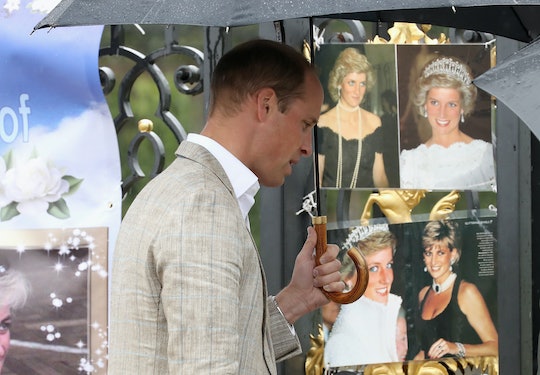 What Prince William Said About Diana's Death Will Break Your Heart

I remember well when Princess Diana died in 1997. I remember her two sons, just 15 and 12 at the time, expected to walk behind their mother's coffin in a morbid public display of grief. I remember thinking it was awful but sort of assuming this was the way things were done in the British royal family. That there wasn't another way because their history of keeping their feelings to themselves was centuries old. I was wrong. In an upcoming interview with the BBC, Prince William opens up about Princess Diana's death and proves he is helping to usher in a more open era for the monarchy.

The future King of the United Kingdom has made mental health issues one of his passion projects in recent years. He partnered with his wife Kate Middleton and younger brother Prince Harry for the Heads Together campaign to help end the stigma around discussing mental health in the United Kingdom and beyond. Now in an interview with soccer players about men's mental health for the BBC's A Royal Team Talk: Tackling Mental Health to air on Sunday, Prince William talks about his own history of mental health struggles. Specifically, the death of his mother Princess Diana in a car crash in Paris, France in 1997.

The father of three talked about dealing with bereavement at a young age, something he unfortunately knows a lot about, as per Hello!:

I think when you are bereaved at a very young age, anytime really, but particularly at a young age — I can resonate closely to that — you feel pain like no other pain. And you know that in your life it’s going to be very difficult to come across something that is going to be an even worse pain than that. But it also brings you so close to all those other people out there who have been bereaved.

The Duke of Cambridge also pointed out the importance of being able to talk about grief, something he believes many British people might find counter-intuitive, as per Us Weekly.

The British stiff upper lip thing, that’s great and we need to have that occasionally when times are really hard. There has to be a moment for that. But otherwise, we’ve got to relax a little bit and be able to talk about our emotions because we’re not robots.

Catherine and I are clear that we want both George and Charlotte to grow up feeling able to talk about their emotions and feelings.

It's a terrible tragedy that Prince William and Prince Harry lost their mother so young. But I have to say it is nothing short of amazing to see Prince William channel that grief into changing the way the British royal family deals with mental health.

Because a stiff upper lip doesn't really help anyone, does it?