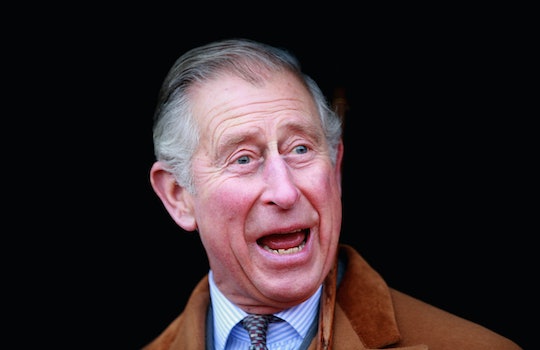 Prince Charles Has A Quirky Obsession, Like All Grandpas, & It Involves Squirrels

Prince Charles is the grandfather to three young children. But just because he's royal, it doesn't mean he isn't also your average grandfather. In fact, he loves spending time with his grandkids and has his own set of *unique* hobbies to keep him busy, just like every other grandpa. If you're not convinced, Prince William's latest revelation about Prince Charles' quirks involving squirrels will hopefully do the trick.

While some grandpas might be obsessed with collecting golf balls, telling awful knock knock jokes, or eating the least popular candy around, it was revealed on Tuesday that Prince Charles has a pretty tame but adorable obsession — he loves red squirrels. In a new interview with the U.K.-based magazine, Country Life, Prince Charles' oldest son (and father to his grandkids) Prince William dished about this intriguing interest, according to People.

"He is completely infatuated by the red squirrels that live around the [Birkhall] estate in Scotland — to the extent that he's given them names and allowing them into the house!" Prince William said of his father.

Talk about quirky. It's one thing to appreciate squirrels but it's another thing to hang out with them in your own house. Although it might seem weird, at the end of the day, this obsession boils down to Prince Charles caring about others and loving nature.

Even Prince Charles knows his obsession is just a bit bizarre. In the magazine, Prince Charles had no shame in admitting that he loves the red squirrels and keeping them around the house, according to The Sun. Prince Charles told Country Life:

They come into the house at Birkhall and they get them chasing each other round and round the inside. If I sit here quietly they will do so around me. Sometimes when I leave my jackets on a chair with nuts in the pockets, I see them with their tails sticking out, as they hunt for nuts — they're incredibly special creatures.

Can you just imagine 70-year-old Prince Charles sitting in his house super excited while watching squirrels take nuts out of the pockets from his coat? This image is kind of hard to believe, but fun nonetheless, and gives some insight into the kind of grandpa that Prince Charles is. It shows that he's caring, invested in others, and isn't afraid to have a little fun.

Even Prince William agrees. "His passion for the environment and the natural world is something that I want to repeat in the way I raise George, Charlotte, and Louis," Prince William told the magazine, according to People.

You can't argue with that. In addition to letting red squirrels into his home, Prince Charles is also the patron of the Red Squirrel Survival Trust, which has a mission to "protect the animals," according to The Independent. So his devotion to these squirrels extends beyond watching them chase each other.

If people think this obsession is a tad nutty (sorry...), a quick internet search will show that Prince Charles isn't alone — other grandparents are much quirkier. One Reddit user asked users on the site six months ago what are the weird quirky things that their grandparents always do, and the users had some amazing responses.

"My grandma would get a Hershey's chocolate bar with almonds, but never ate the almonds, she just sucked on them and put them in a pile" another wrote. "Then she would ALWAYS offer them to someone."

Needless to say, those stories put Prince Charles to shame.

There's no denying that Prince Charles is amazing with his grandkids and has so much love for them. And it's clear that they love him unconditionally — even if he does have an obsession with red squirrels.