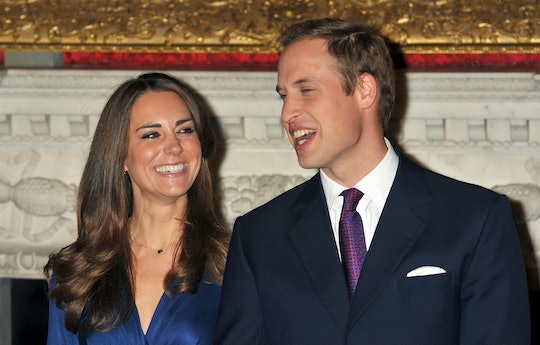 As the future King of England, Prince William doesn't tend to wax poetic about his personal relationship with his wife of nearly nine years. He clearly loves her, but as someone who spends the vast majority of his life in the public eye he might want to keep some moments to himself. So it was something of a surprise when Prince William revealed a touching detail about proposing to Kate Middleton during a recent event at Buckingham Palace. Nothing too intimate, of course, but a symbolic gesture that seems to speak to the level of his feelings for her.

The Duke and Duchess of Cambridge were on hand with other members of the royal family at Buckingham Palace to honor the United Kingdom-Africa Investment Summit on Monday. During the event, Prince William gave a lovely speech about the importance of his personal relationship with Africa that stretched back to a difficult time in his life. As he explained in his speech, his father Prince Charles first took him and his younger brother Prince Harry after the tragic death of their mother Princess Diana in 1997 and he could "think of no more fitting place" than Africa when proposing to Middleton in 2010.

"The African continent holds a very special place in my heart. It is the place my father took my brother and me shortly after our mother died. And when deciding where best to propose to Catherine, I could think of no more fitting place than Kenya to get down on one knee," he said.

So now we know that Prince William got down on one knee during his proposal to Middleton in 2010. The couple had already been dating for seven years after meeting at St. Andrew's College in Scotland in 2001. They went through a brief break-up in 2007 before reuniting that same year, as Parade reported, and when Prince William decided he was ready to pop the question in a rustic Rutundu log cabin in Kenya.

Middleton herself said the proposal was "very romantic" during an ITV interview with Tom Bradby and called her future husband "a true romantic," which certainly seems to be true even nine years and three children later.

Prince William's proposal led, as we all know, to a wedding in April 2011 and three children in the following years, 6-year-old son Prince George, 4-year-old daughter Princess Charlotte, and 1-year-old Prince Louis.