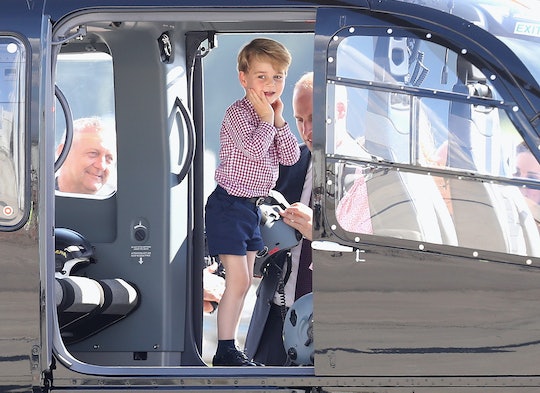 Prince George might be third in line to inherit the royal throne of the United Kingdom and could very well be the King of England some day. But at the end of the day, he is your average 5-year-old boy. He loves his siblings, playing with his toys, and isn't so much into making public appearances as his parents are. And most importantly, he loves presents. So, it makes sense that Prince William said that Prince George would "never forgive" him for this very funny reason that has to do with just that — presents.

On Wednesday, Prince William took a break from celebrating his wife, Kate Middleton's birthday, to visit the Air Ambulance Charity, according to Harper's Bazaar. During this appearance, Prince William reportedly received a bunch of gifts (which is fitting, since it was his wife's birthday), including a toy helicopter. Although Prince William might have refused gifts like these before he was a father of three, he couldn't say no to taking home the toy helicopter home to his oldest son, Prince George.

"I can't get back without a helicopter," Prince William said. "George will never forgive me."

What parent hasn't been there? No matter where they go without their kids, it always seems as if they have one question for when their parents get back — "What did you bring me?"

I told George this morning we were going to see the pilots today. And he said, "If you see a helicopter, can you take a picture?"

Prince George loves helicopters that much, that he even likes looking at photos of them. But really, what little boy hasn't been obsessed with planes, trains, or any mode at transportation at any point in their lives? Especially since Prince George is quite used to riding in helicopters, just like his dad was at his age.

But Prince George's obsession has been known for a while. When Prince George embarked on a royal tour with his parents in 2017, he had a blast riding and posing in a helicopter in Germany, according to TODAY. And he hopes to spend more time in helicopters. Prince George reportedly wants to become a pilot when he grows up, according to Express, which is what Prince William did when he was a part of the East Anglican Air Ambulance, where he worked until 2017, according to The Telegraph.

Prince George's obsession with helicopters is so adorable, because it shows that he's just your average little boy — who will likely be the King of England in the future.