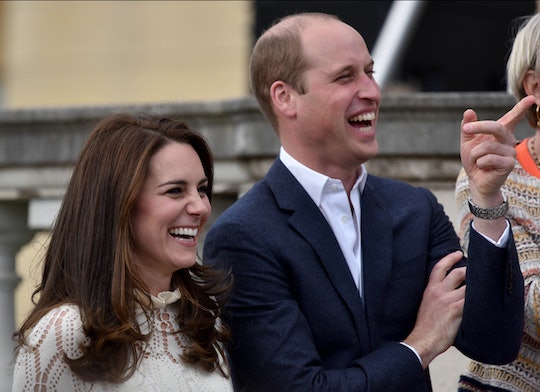 If you've ever wondered how it would feel to celebrate a birthday as a royal, you're definitely not alone. I, too, have often tried to imagine the glittering celebrations that would be thrown in my honor. Obviously there would be tiaras, and I suspect my guests and I would be eating the most glamorous food on the planet... scrambled eggs and smoked salmon. I wonder if this is what Kate Middleton will be eating on her birthday. I also wonder if a glitzy party will be thrown for her at the palace. Well, Prince William's response about Middleton's birthday plans might not tell you much. Perhaps because he knows better than to spoil the surprise?

The Duchess of Cambridge turned 37 on Wednesday, Jan. 9, and she was clearly spending at least part of that day sans husband. Prince William was back on official royal duties after the Christmas break, visiting the London Air Ambulance to celebrate 30 years of service, according to Cosmopolitan.

Of course, the Air Ambulance program is especially important to Prince William; he worked as a pilot in Norfolk until 2017, according to the BBC. While he was visiting the London Air Ambulance, the future King of England was asked about his wife's birthday plans. His response? As The Mirror reported, Prince William said: "Now that would be telling."

I mean.... thanks for nothing, Your Highness.

One thing we do know for sure, Middleton herself won't have to work on her birthday. She is not set to head back to her official royal duties until Jan. 15, according to Cosmopolitan, which should mean she can really cut loose and get on down to party town to celebrate her birthday.

In fact, the mother of three has been known to do a little partying on her past birthdays... particularly those that fell before she became an official member of the royal family. For instance, she and sister Pippa Middleton went out clubbing together to celebrate her 26th birthday, the same year she and Prince William went through their epic break up, according to Parade. I bet she has some stories from that night, am I right?

The very next year, she and Prince William were back together and he was reportedly trying to make up for lost time. In fact, according to ELLE, the smitten future husband of Kate Middleton surprised her with a romantic birthday getaway to a cottage on the Queen's Scottish property of Balmoral. Nice.

Middleton has enjoyed a few exciting birthdays, including spending her 31st at the Cirque de Soleil with her family, but it looks like this year she's planning on taking it easy. According to the Daily Mail, Middleton is expected to enjoy a "quiet celebration" with Prince William and the couple's three children; 5-year-old Prince George, 3-year-old Princess Charlotte, and 9-month-old Prince Louis. No further details were shared, certainly not by Prince William, so I suppose we'll just have to use our imaginations.

My imagination is telling me they're eating plates of scrambled eggs with smoked salmon and drinking copious amounts of champagne.