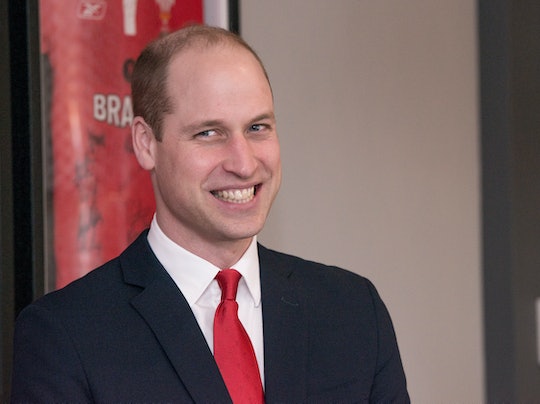 The royal baby is due any second, and fans are dying to know when Prince Harry and Meghan Markle's first child is coming. The royal family has been tight-lipped when it comes to details about the baby, meaning the public hasn't gotten any information beyond that the child is due in spring, but that hasn't stopped reporters and royals fans from asking all about it. Prince William's response to a question about the royal baby's arrival was pretty cheeky, but doesn't give fans any information about when to expect the baby to make his or her debut.

During a visit to New Zealand, Prince Harry's big brother was asked if there had been "Any sign of the royal baby?," according to a video shared by The Daily Express. Prince William didn't shy away from the question, but was careful not to give anything away. He quickly delivered a cheeky response, which suggested the royal baby's due date is fast approaching. It looks like the Duke of Cambridge and the rest of the royal family have been on baby watch just like the rest of the world.

"I haven't got my phone on me, I have no idea," Prince William responded, according to The Daily Express. "You guys will find out before I do at this rate!"

Information about the royal baby has been scarce, and there's a good reason why. Prince Harry and Meghan Markle have decided to keep the birth of the royal baby extremely private. Buckingham Palace said in a statement, obtained by Ireland's Independent, "Their Royal Highnesses have taken a personal decision to keep plans around the arrival of their baby private." As such, the public won't see a photo or learn any details about the baby until the couple feels comfortable. The couple is looking "forward to sharing the exciting news with everyone," according to the Today show. They intend to let everyone in on the exciting moment "once they have had an opportunity to celebrate privately as a new family."

Markle has been absent from the public eye while she awaits the arrival of her son or daughter. Prince Harry, however, has been attending events. As reported by E! Online, the Duke of Sussex attended the London Marathon on Sunday. He cheered on runners and met with volunteers at the event. Prince Harry was also on hand to congratulate the race winners. His appearance came amid rumors the former Suits actress went into labor. It appears those rumors weren't true.

Prince Harry and Markle announced that they were expecting back in October, according to a report from the New York Times. The latest royal baby will be the first child for the couple, and both have been looking forward to welcoming him or her into their family. At the time of the announcement, The Times noted that there had been much speculation about Markle being pregnant. They confirmed the news in a statement from Kensington Palace.

The royal baby may not be here yet, but there are countless people — including members of the child's family — eagerly awaiting his or her arrival. It shouldn't be much longer before the child makes its entrance into the world. The public will be notified of the baby's arrival by the palace, but everyone will have to wait for photos and info about the name. Royal fanatics have waited this long, so what's a few more days or weeks?