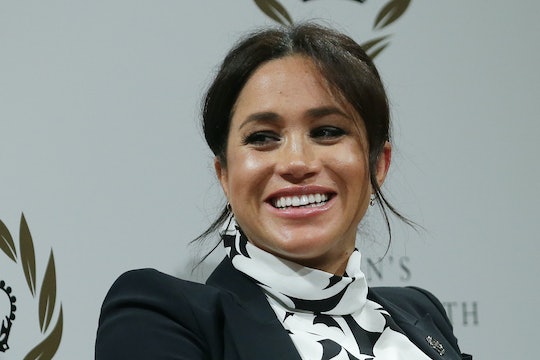 Did Meghan Markle Go Into Labor? Fans Were Convinced It Was "Go Time"

With only a few more days left of April, the final countdown to baby Sussex is officially on! Although Meghan Markle and Prince Harry have let the public know they plan to keep the details surrounding the arrival of their first child private, royal enthusiasts are still keeping their eyes peeled for any clues that labor is imminent. So did Meghan Markle go into labor? Fans were convinced baby Sussex was on the way.

As People reported, an ambulance was spotted near Frogmore Cottage near Windsor Castle — where Meghan Markle and Prince Harry currently reside — on Friday, sparking rumors that the Duchess of Sussex had gone into labor. However, it looks like this was a false alarm. Because the South Central Ambulance Service told the publication the vehicle was actually one of their driver training ambulances. “South Central Ambulance Service will continue to care for all patients in Windsor in the usual way,” the organization said in a statement. “It is not possible to comment on the general movement of ambulances around the Windsor area and patient confidentiality must be respected at all times. Furthermore, we do not comment on operational matters relating to members of the Royal Household.”

Considering Markle had previously revealed that her due date is at the end of April/early March, "go time" could literally be any day now. ITV's royal editor Chris Ship told Good Morning Britain the arrival of baby Sussex is "imminent," according to Inside Edition. "We know the baby is due, in fact I can tell you that the due date is pretty much today," Ship said. "Today, tomorrow, we really are in the realms of imminent arrival." He continued:

Twitter seems to be impatiently waiting baby Sussex's arrival. One Twitter user wrote, "I think it's rude that #MeghanMarkle hasn't gone into labor yet. #royalbaby#babysussex#sarcasm."

Others seem to be more understanding. Another person tweeted, "Seeing everyone online anxiously awaiting the arrival of #BabySussex (including me), I keep thinking: Imagine how #MeghanMarkle and #PrinceHarry feel!!! I’ve been there...waiting for labor to start to finally meet my babies. I swear time slows! Best wishes for an easy birth."

The Duke and Duchess of Sussex issued a statement earlier this month giving everyone a heads-up that they were doing things a bit differently than Prince William and Kate Middleton, according to USA Today. In a joint statement released by Buckingham Palace, Markle and Prince Harry said that they "have taken a personal decision to keep the plans around the arrival of their baby private.” They continued:

The Duke and Duchess look forward to sharing the exciting news with everyone once they have had an opportunity to celebrate privately as a new family.

Look, I get it people: It's a royal baby. We're all incredibly excited to watch Meghan Markle and Prince Harry become parents. But honestly, freaking out every time an ambulance gets near Frogmore Cottage isn't going to make baby Sussex come any faster. So let's just all take a chill pill and let them be, deal?