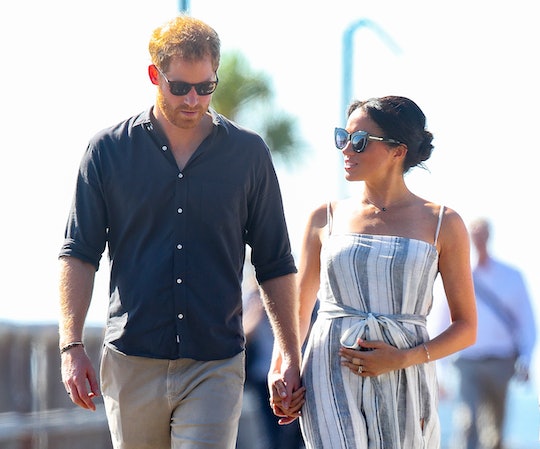 As April draws to a close in a matter of days, Doria Ragland has already landed in England and the Duchess of Sussex has been MIA from her royal duties for roughly a month now. So there's only one reasonable assumption here: Baby Sussex is due, and soon. But since she's been out of the public eye for a minute, has Meghan Markle had her baby yet? Well, her hubby Prince Harry may have provided an essential clue with his latest appearance on Thursday.

Prince Harry was seen on April 25 attending a service for Anzac Day, which is a memoriam for the citizens of Australia and New Zealand who have died in military conflict or peacekeeping operations, according to Town & Country. April 25 marks the anniversary of the first major battle between Australia and New Zealand during WWI, according to TIME, which is why it is celebrated as such. Events to commemorate the day are typically well-attended by royals, as they were last year, but the fact that Prince Harry showed up at the annual service at Westminister Abbey might be telling.

In fact, his presence might be even more revealing that we realize. According to Marie Claire, a number of royal reporters noted that Prince Harry wasn't announced to attend Anzac Day until this morning, and this is likely because Markle is that close to giving birth. The fact that he did show up with Kate Middleton (Prince William is, ironically, in New Zealand for other services) seems to suggest that Markle isn't in labor... at least, not right now.

For instance, freelance royal journalist, Netty Leistra Groningen, tweeted, "The fact that officially the Duke of Sussex has been announced for Anzac Day last minute today, means that the baby is expected any day now. Otherwise he would have been announced to attend before."

Meanwhile, royal reporter for the Daily Mail, Rebecca English, shared on Twitter that she was told Prince Harry was "pleased" to be at the event today, and English reported that because he was in attendance it "suggests no sign of #BabySussex quite yet, then!"

Additionally, royal reporter for The Daily Express, Richard Palmer, shared on Twitter that Prince Harry "wasn’t listed as attending but I understand he had always hoped to be there if the baby hadn’t arrived by now."

Though the world is always waiting on the edge of their seats (or, more realistically, constantly refreshing their feeds) to welcome a new royal baby, this delivery is extra interesting and extra mysterious, because it is the first time in recent history that a royal will be veering away birthing protocol. Leave it to Meg, though.

First of all, Markle won't be delivering in St. Mary's Hospital as Kate Middleton and Princess Diana did, nor will she be doing the traditional "first look" with the baby outside the Lindo Wing, according to People. (To be fair, asking a woman to do one of the most highly publicized photo shoots of her lifetime/possibly the decade mere hours after delivery is, at minimum, an extremely tall ask.)

Earlier this month, according to The New York Times, Buckingham Palace made all of that clear when it shared a statement on behalf of the couple, stating that they "have taken a personal decision to keep the plans around the arrival of their baby private. The Duke and Duchess look forward to sharing the exciting news with everyone once they have had an opportunity to celebrate privately as a new family."

Now, given that there won't be an army of press waiting for a whole section of St. Mary's Hospital to be shut down — signaling that the delivery is imminent — means that we really might not know exactly when Markle gives birth, at least, not until Buckingham Palace releases an official announcement.

It's possible that the couple will share their own photo of their new son or daughter on their new Instagram account, @sussexroyal, which has already been widely speculated to be run by Markle herself, for a variety of reasons including but not limited to the spelling of certain Americanized words and the exact same use of photo filters and frames that she used on her once very popular personal account when she was an actress.

Regardless, what we know for sure is that a royal baby is likely days away from being born, and however we find out will be undoubtedly exciting.