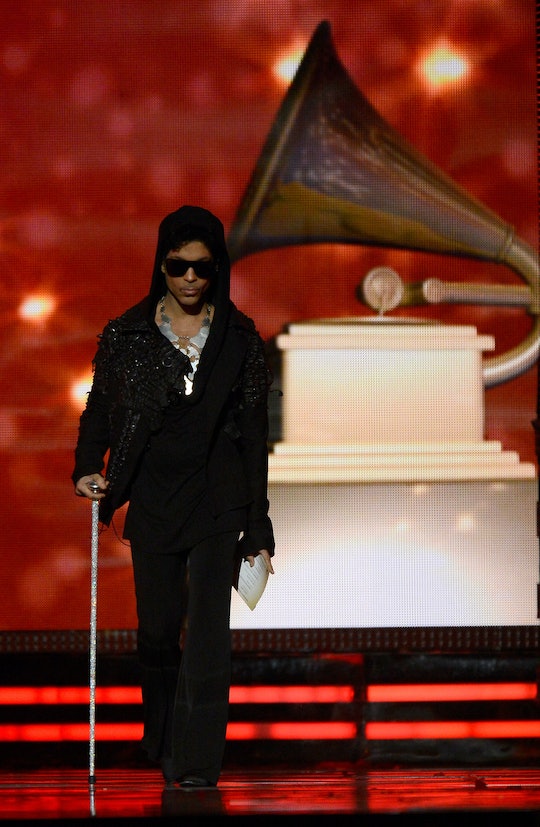 Prince's Supposed Anti-Gay Stance Was A Bit Confusing, Like The Man Himself

Grammy and Oscar-winning performer Prince, beloved nineties icon and star of most of the posters on my bedroom wall in high school, died on Thursday at his home in Paisley Park, Minneapolis at the age of 57. While an official cause of death has not yet been released, fans have already begun sharing their grief on social media sites at the loss of a musical genius. His Purpleness was a megastar, a one-named icon who managed to stay relevant for four decades. He was known for his unparalleled generosity as a songwriter, his inspired performances, and in most recent years, Prince's supposed stance on gay marriage made headlines for being controversial at best. But was this anti-gay marriage stance how Prince truly felt or was it an urban myth?

See, before there was a Kanye West out there to stir up a little controversy, there was Prince. He sang about sex and pain and spirituality all with the same incredible vocal range that defied logic. His words, even when they made his audiences uncomfortable, never ceased to ring true. And he never stopped standing up for his beliefs.

When he struggled through a professional split with Warner Bros., Prince appeared in chains on television and referred to himself as a "slave." And of course, we all remember when he became "the artist formerly known as Prince." Rumors of his ravenous sexual appetite too abounded for years, and Prince never blinked an eye, no matter how outrageous the claims. But when he was labelled "anti-gay"... suddenly, one of the most controversial figures in modern music was furious.

Prince gave a rare interview to Claire Hoffman of the New Yorker in 2008, in which he discussed his own spirituality, and his personal belief system.

When asked about his perspective on social issues—gay marriage, abortion—Prince tapped his Bible and said,

God came to earth and saw people sticking it wherever and doing it with whatever, and he just cleared it all out. He was, like, "Enough."

Prince, it turns out, was furious over the news story. A source close to Prince even told controversial gossip blogger Perez Hilton that he was misquoted.

Apparently, the interviewer did not even use a recorder when she spoke with His Holy Purpleness, and that when she called his people to fact check, it turned out she had several factual inaccuracies, including a little bit about Prince recovering from hip surgery, which he never even had... What His Purpleness actually did was gesture to the Bible and said he follows what it teaches, referring mainly to the parts about loving everyone and refraining from judgment....

"We’re very angry he was misquoted," Hilton quoted the source as saying.

While it is true that Prince became considerably more conservative after converting to Jehovah's Witness in 2001, it is difficult to believe that the same man who brought mainstream cross-dressing to the '80s was anti-gay. It was terribly out of character, particularly considering his well-documented stance all about loving one another.

Prince is gone now, so we will never truly know what his thoughts were about gay marriage, or anything else for that matter. I like to believe that he was stirring controversy with the best intentions — to start a dialogue that needed to happen. It seems like something he would do.

For now, we will have to focus on the one thing we can all agree on about Prince Rogers Nelson — his music. Played in wood-panelled rec rooms, smoky dance clubs, and (in my experience) Volkswagon convertibles driving through the dark, deserted streets of a little town in Europe. His music wasn't just the soundtrack, it was the whole point. This we know for sure: he was great. He made a difference.