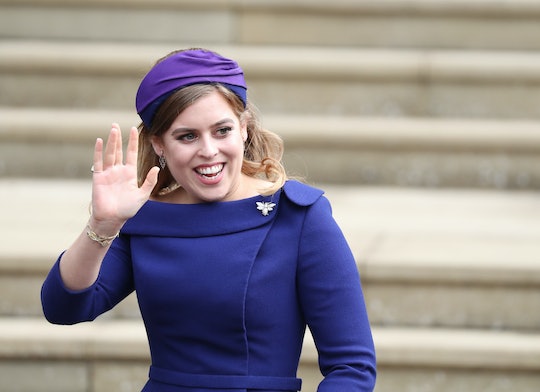 Dust off your fancy hats and get ready to celebrate because another royal is preparing to tie the knot. The Duke of York's daughter, and the Queen's granddaughter, Princess Beatrice is engaged! While she and her hubby-to-be won't say their "I dos" until next year, there are some romantic details to gush over until then, like everything about Princess Beatrice's engagement ring. It's truly a timeless and classic piece of jewelry that comes with a touching backstory as well.

On Sept. 26, Princess Beatrice announced that she got engaged to Edoardo Mapelli Mozzi earlier this month while on vacation in Italy together, according to the BBC. "We are both so excited to be embarking on this life adventure together," the pair said in a joint statement. "We share so many similar interests and values, and we know that this will stand us in great stead for the years ahead, full of love and happiness."

Many years of happiness ahead indeed, but right now, all we know is we're pretty much blinded by that stunning new piece of jewelry on Princess Beatrice's finger. Thanks to the photos they also released at the time of the announcement, professional jewelers and amateurs alike have all been able to get a closeup look at the ring, which Alicia Davis, Shane Co.'s VP of Merchandise, says is a "classic solitaire."

Davis went on to say what she believes the carat and setting is for the ring, and why the design is both regal, and yet timeless. "The brilliant round diamond looks to be about 2.5 carats set in a 6-prong platinum setting flanked by two smaller round diamonds and a baguette on either side,” Davis said. “This three-stone style ring is a beautiful pairing of classic and on-trend styles. The timeless round diamond and regal, stylish baguettes give the ring a look that could fit any bride, whether she is vintage, trendy, or traditional.”

In an interview with People, ring designer Shaun Leane — whom Meghan Markle is also a fan of — confirmed the diamond size, and also shared a bit about the process of creating the ring. "Edo was very prepared and he had done his research. He had a very strong feeling about what he wanted," Leane told the magazine, adding that he had come in about four months ago to start planning. "He knew that he wanted a round stone, and he knew he wanted platinum. We talked about aesthetic and he said, ‘I really love Art Deco, and Beatrice really likes a Victorian aesthetic in jewelry.’ We talked about fusing the two together and he thought it would be lovely to do that, to fuse their two personalities together within the ring. There was a real unity."

Speaking of unity, Princess Beatrice's family has already shared how "thrilled" they are to welcome Mozzi into the family. Prince Andrew and Sarah Ferguson have already released a statement, Town & Country reported, sharing the following: "We are thrilled that Beatrice and Edoardo have got engaged, having watched their relationship develop with pride... We are the lucky parents of a wonderful daughter who has found her love and companion in a completely devoted friend and loyal young man. We send them every good wish for a wonderful family future."

On Twitter, Ferguson also shared how pleased she is with the news, and how proud she is of her two daughters. "I know what a mother feels so I have tears of joy," she wrote alongside a photo of her daughter's engagement. "I am so proud of this sensational news. Andrew and I are just the luckiest people ever to have two great sons in law."

As it has been mere hours since the engagement was announced, there's no word yet of when a wedding date might be. But until then, there are fortunately stunning photos of her dazzling ring to gaze at and hopefully Princess Beatrice will share some wedding planning updates soon.