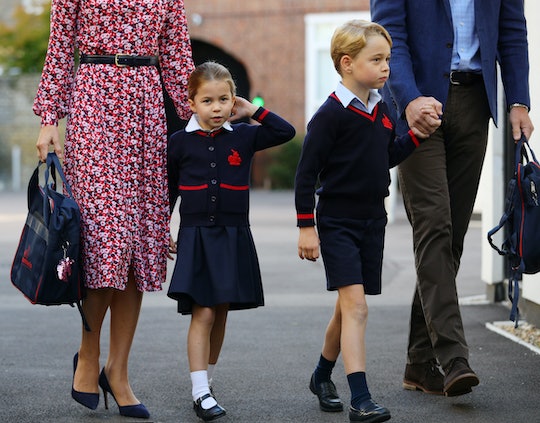 Princess Charlotte's New Favorite Thing Is A Throwback To The '80s

Princess Charlotte is something of a trendsetter, and don't even try to argue with me because you know it's true. She might only be 4 years old, but honestly, if I thought I could pull off half of her wardrobe or her perfect casual ponytail, I would totally do it. Much like her mother, Kate Middleton, she has perfect hair and an adorable outfit for every occasion, along with a certain something that inspires her fans. And just when you thought this little royal couldn't get any more cool, Prince William revealed that Princess Charlotte is all about a certain whimsical trend that first became popular in the '80s.

The first time royal fans saw evidence that Princess Charlotte was into a very '80s trend, aka the love of unicorns, was in early September. She and her older brother, 6-year-old Prince George, were escorted to their first day of school at Thomas's Battersea in London by their two parents, the Duke and Duchess of Cambridge, on Thursday, Sept. 5. And as is tradition, a few photographers were allowed on the scene to film their arrival, and they spotted more than just Middleton's amazing blowout and the children's adorable school uniforms while there. Eagle-eyed fans also took note of a certain accessory Princess Charlotte had attached to her backpack, which her mother had carried for her — a sparkly unicorn keychain, according to Hello! magazine. You know, for all of her key carrying needs.

This small detail had royal fans super excited, especially because Princess Charlotte's parents are protective of her privacy along with that of her two brothers, Prince George and 1-year-old Prince Louis. It was like a little glimpse into the tiny trendsetter's life, the same little girl who charms us all by sticking her tongue out at journalists every chance she gets. And just in case anyone thought Princess Charlotte's sparkly unicorn keychain was a flash in the pan, perhaps chosen by her mother or another member of the royal family, fans got recently got confirmation from her father Prince William. As he told supporters during a recent royal visit to Harcombe House in London to promote a new texting service for first responders, Princess Charlotte adores unicorns. "Loves them," he said according to Elle. "Very cool."

So get ready for these mythical creatures beloved by all '80s kids to come back with a vengeance, folks.

Now that Princess Charlotte is a confirmed lover of unicorns, I hope she follows a few more trends from the '80s that I've been deeply missing. I know that Thomas's Battersea has a school uniform since it's a fancy prep school and everything, but maybe school administrators will allow her to introduce leg warmers into the equation. Rainbow colored would be best to go with her sparkly unicorn key chain, obviously. Perhaps Charlotte and her new friends could start to make friendship bracelets together. Scratch that, I mean the entire class would make them together because Thomas's Battersea reportedly does not encourage best friends in an effort to minimize exclusion, according to International Business Times.

Because if Princess Charlotte is going to be a trendsetter, she might as well stand for inclusion and acceptance. And also unicorns.