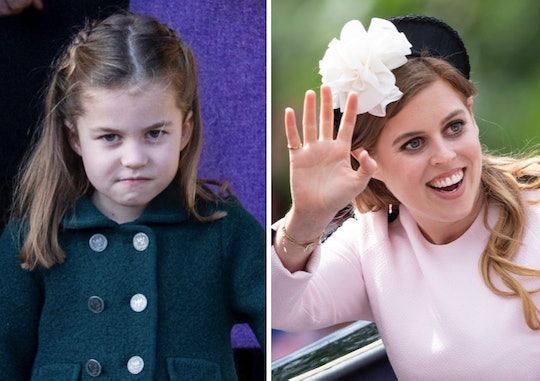 It might be safe to say that fans of the royal kids love an adorable hand-me-down moment. There's something about the idea of one of the wealthiest and famous families in the world passing all of their kids' clothing to each other that is too charming for words. Over the years, Kate Middleton has been seen handing down her kids' clothes to each other, but it looks like her daughter Princess Charlotte also wore one of Princess Beatrice's old dresses years ago.

Earlier this week, Hello! Magazine spotted a shared look between Prince William's first cousin Princess Beatrice and his now 5-year-old daughter Princess Charlotte that dates all the way back to March 1990. Decades ago, then 18-month-old Princess Beatrice, oldest daughter of Prince Andrew and Sarah Ferguson, wore a sweet little blue dress to go meet her newborn sister Princess Eugenie at the Portland Hospital of London that month. The blue and red smocked dress had puffed short sleeves and a little white Peter Pan collar, and the young princess wore it with red Mary Jane shoes and tights.

Well flash forward to 2016, when little Princess Charlotte joined her parents on a visit to Canada. She wore a blue smocked dress with red stitching and a white Peter Pan collar that looked identical to the one worn by Princess Beatrice all those years ago.

While Princess Charlotte has been spotted wearing hand-me-downs from her big brother Prince George in the past, especially his sweaters as she did in a birthday photo with baby brother Prince Louis from 2018, their recycled clothing does tend to stay within the Cambridge family. Prince George has worn baby clothes from his father Prince William at both his sister's christening in 2015 and his baby brother Prince Louis' christening in 2018. And sure, as Marie Claire reported, eagle-eyed royal fans spotted Prince Louis wearing hand-me-downs from his uncle Prince Harry at his first Trooping The Colour. But spotting a dress from cousin Princess Beatrice? That feels like next level thrifty. You have to wonder what sort of laundry detergent the royal family is using to keep their kids' clothes in such pristine condition.

Here's hoping that clothes from the three Cambridge kids will be passed along to Princess Beatrice's children if she and brand new husband Edoardo Mapelli Mozzi decide to have them someday. It only seems fair.