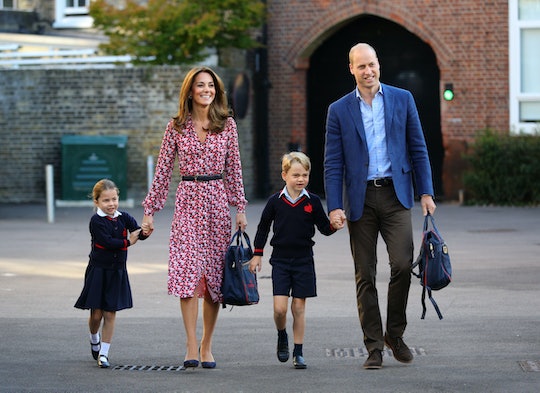 I'm not really one to get emotional about kids starting school. Okay, I'm lying, of course I am. Even kids who aren't mine, apparently. Because on Wednesday Princess Charlotte started school with Prince William and it made me surprisingly emotional. Please remember I don't know this child and yet. It made no difference. Seeing the 4-year-old in her school uniform gave me a lump in my throat.

Kate Middleton and Prince William had a big day on Wednesday. The proud parents took their two older children, Princess Charlotte and her 6-year-old brother Prince George, to school for their first day. While Prince George is something of an old hat at Thomas's Battersea School in London, having been going there for two years and everything, Princess Charlotte is brand spanking new. She is starting her career as a full-time student at the school, joining her brother for the first time ever. Kensington Palace shared a video of the Duke and Duchess of Cambridge doing the official school run with their two kids, much like when Prince George started at the school two years ago. Except this time, of course, both parents were able to be there and both children were on hand for the big moment. Here's the video and please pay attention to how excited Princess Charlotte is to be at school for the first time, it's totally marvelous.

While this was obviously a big day for Princess Charlotte, it was also a big day for Kate Middleton. When Prince George had his first day of school two years ago, Middleton was pregnant with 1-year-old Prince Louis and suffering pretty terribly from hyperemesis gravidarum, reports NBC News, a kind of severe morning sickness where there can be so much nausea and vomiting pregnant women are sometimes hospitalized for dehydration. Because of this, Middleton missed his first day of school and Prince William ventured off with Prince George alone, which must have been difficult for Middleton. She and Prince William both committed to doing the school run with Prince George after he started, but it can be upsetting to miss that first day as a mom.

Fortunately Middleton didn't have to miss it this time around. She and Prince William were both there, holding their kids' hands and carrying their backpacks as they were met by Princess Charlotte's teacher and head of Thomas's Battersea Lower School, Helen Haslem, the same teacher who met Prince George on his first day of school in 2017, as per The Daily Express. They looked happy and relaxed, of course, and Princess Charlotte looked super excited. Playing with her ponytail and smiling for the cameras.

No wonder she looks excited. Princess Charlotte's life is about to change. Instead of spending most of her time with her family, she is going to get to branch off and make friends of her own at school.

It's a pretty big deal.

More Like This
Anthony Anderson Thanked His Son For Inspiring Him To Finish His College Degree
Princess Diana Gave Prince William A Cute Nickname That's Stuck With Him For Years
You're Going To Laugh So Hard At These Graduation Memes
From Captions To Gifts, These Are All The Kindergarten Graduation Ideas You Need