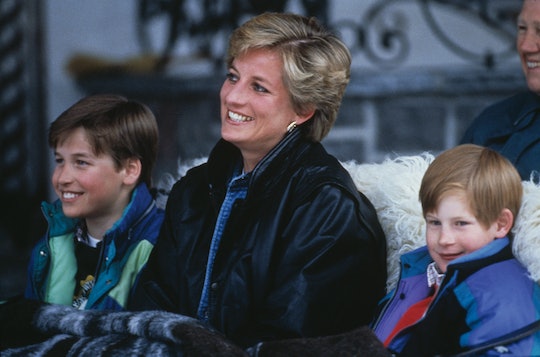 Prince Harry and Prince William have parted ways for the first time in their lives at the start of 2020. Prince William remains in the United Kingdom while Prince Harry has broken away from his senior role to start a new life in Canada with his wife Meghan Markle and son Archie. But they are still brothers, with an important common love that binds them: their mom. And Princess Diana once wrote a letter about her love for her sons that could hopefully resonate for them more powerfully now than ever.

In the weeks since Prince Harry and Markle announced their plans to lead a more private life with their son Archie, a whole lot has changed for the royal family. The Sussexes are currently staying on Vancouver Island off the west coast of Canada, according to Hello! Magazine, while Prince William and Kate Middleton stayed behind with their three children in the United Kingdom. Much has been said about how the royal family might feel about Prince Harry's exit from his royal life as well as the change it could potentially bring to his relationship with his brother the Duke of Cambridge.

Apart from releasing a joint statement denying Prince William ever "bullied" his brother and sister-in-law as one UK tabloid reported, according to CNN, the family has had little to say about the move and what it could mean for the two sons of Princess Diana. But it seems Princess Diana herself once said something powerful and poignant about her sons. This week, her former butler and confidante Paul Burrell shared a letter from the late princess about her boys and it's a beautiful reminder of the importance of their shared history.

The letter Princess Diana, who died in a car crash in Paris in 1997 after being chased by paparazzi, sent to Burrell was all about her hopes for her sons:

I love my boys to death and hope that the seeds I’ve planted will grow and bring the strength, knowledge and stability that is needed.

Burrell shared the letter in a note of support for the decision made by Prince Harry and Markle, explaining in the caption of his Instagram post: "As Harry, Meghan and Archie embark on a new life, I am reminded of some poignant words which Princess Diana wrote to me many years ago." He also wrote in an earlier post about Princess Diana that he believed "in my heart I know that she would want Harry and Meghan to be happy above all else."

After everything both Prince Harry and Prince William have experienced since losing their mother at 12 and 15 years old respectively, it seems likely these two brothers will find their way through a difficult, tricky time as well.