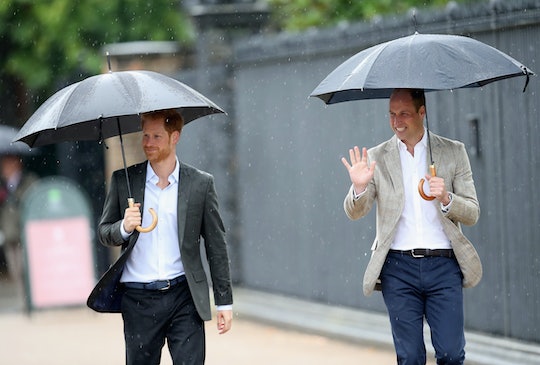 It's difficult to imagine what it was like for people in the LGBTQ community 40 years ago, but let me just tell you it wasn't always great. There were people in this world who felt justified in their homophobia, as though their incorrect belief system was somehow more valid than a person's right to love who they choose. The world is still not perfect, but it has most certainly changed for the better. And one of the people who was part of that beautiful change was Princess Diana, a tireless supporter of gay rights. In fact, Princess Diana's work for LGBTQ people seems to have inspired her sons in some seriously empowering ways. Because she always believed that love was love; the difference was she wasn't afraid to say it out loud.

Princess Diana became arguably one of the world's most famous citizens when she married Prince Charles, heir to the British throne, in 1981. At the time she was a bit of a mystery, a young woman in her twenties with a shy smile and a seemingly reserved nature. There are some royal watchers who might have assumed her quiet reserve would mean she was the sort of woman who would do as she was told. History tells us otherwise.

Princess Diana spent her time as a member of the royal family shedding light on issues that were important to her regardless of possible controversy. In 1991, for instance, when the AIDS epidemic was laying waste to the LGBTQ community and misinformation was spreading like wildfire about how a person could contract the disease, Princess Diana did something momentous. She reached out to shake the hand of an HIV/AIDS patient. It was a simple moment, but it made a massive difference. As she explained at the Children and AIDS Conference in 1991:

HIV does not make people dangerous to know, so you can shake their hands and give them a hug. Heaven knows they need it.

Princess Diana became a champion and a voice for people in the LGBTQ community, particularly with her work all over the world with HIV/AIDS patients. In 1987 she opened Britain's first AIDS ward at London's Middlesex Hospital, and she visited hospices in places like Casey's House in Toronto, Canada, where she did more than simply show up for a photo opportunity. As MacLean's magazine noted at the time, Princess Diana went from room to room, visiting patients and sitting on their bedsides to hold their hands. This deeply empathetic behavior doesn't just continue to resonate with the community she supported, but also with her two sons, Prince Harry and Prince William. As Prince Harry said during a 2017 speech on behalf of his mother, per The Guardian:

When, that April, she shook the hand of a 32-year-old man with HIV, in front of the cameras, she knew exactly what she was doing. She was using her position as Princess of Wales, the most famous woman in the world, to challenge everyone to educate themselves, to find their compassion, and to reach out to those who need help instead of pushing them away.

Prince Harry and Meghan Markle recently honored his mother during Pride Month by sharing a beautiful collage of photos on their royal Instagram page including one of her, captioning the post in part, "We stand with you and support you."

Princess Diana's inclusive attitude also lives on in the way her children are raising their own children. Prince William recently visited the Albert's Trust, a charity focused on homeless LGTBQ youth in London, and was asked how he would react if one of his children identified as LGBTQ in the future. He immediately said that he and his wife Kate Middleton would "fully support" their child, no matter what, as per CBS News. And considering the fact that Prince William is second in line for the throne, that is a pretty wonderful thing.

Princess Diana died in a car crash in Paris in 1997, when her sons were just 15 and 12 years old. But she clearly made an indelible impression that both men carry on to this day. She has taught her sons to stand up for what's right, to speak out if they see injustice in the world, and perhaps best of all, to accept everyone.

Because love really is love. Period.