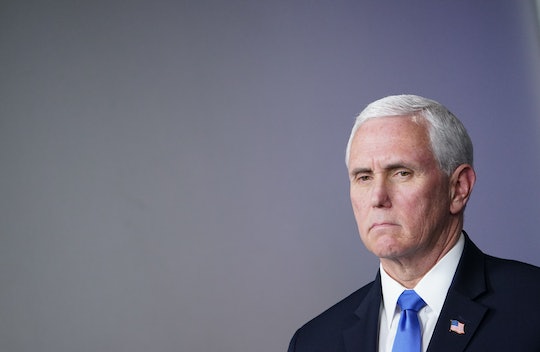 After Vice President Mike Pence and Secretary of Education Betsy DeVos praised a private school system for reopening, one of its campuses in Wake Forest, North Carolina has a fourth grade class under a 14-day quarantine.

Thales Academy, a group of eight K-12 private schools located throughout North Carolina, saw Pence visit its Apex campus last month on July 29 to learn about the school's "experience here at the forefront of reopening." At the time, he was joined by DeVos, and the two sat down with a group of fourth graders as they answered questions. "The one thing we know studying the data from around America and around the world is the risk the coronavirus poses to healthy children is very low," Pence said during his visit.

While early research has suggested that "children do not appear to be at higher risk for COVID-19 than adults," according to the Centers for Disease Control and Prevention, a new study published in July in JAMA Pediatrics found that young kids may be able to spread the virus just as much as older children and adults. "This has important public health implications, especially during discussions on the safety of reopening schools and daycare," lead researcher Dr. Taylor Heald-Sargent said in a press release for the study.

At the time of his visit, Pence praised Thales Academy for opening earlier than many others in the country. "We're here today because to open up America, we've got to open up America's schools and Thales Academy is literally in the forefront," he said. And for her part, as the Associated Press reported, DeVos said during a roundtable discussion regarding schools reopening, "There’s too many schools in this state and others that are ignoring parents and leaving schools closed."

Because Thales Academy is a private school system, they are not bound to the same rules and guidelines as publicly funded schools when it comes to reopening, according to WRAL.

On Thursday, ABC News reported Thales Academy's Wake Forest campus, a sister campus nearby the one Pence visited, would be sending an entire fourth grade class, including both staff and students, into quarantine for 14 days after school officials learned that a student had been infected with COVID-19 by a family member. The student in question was reportedly asymptomatic and the last time they attended school was last Friday, according to the news outlet.

In a statement to CBS 17, Thales Academy said it is "committed to numerous safety protocols and will continue to work to keep students, staff, and families as safe and healthy as possible" and added that schools "will continue thorough cleanings throughout the school day."

North Carolina Gov. Roy Cooper announced on Tuesday that the state is planning to put reopening plans for schools "on pause" until September in an effort to stabilize coronavirus numbers across the state. "With the opening of schools, people will move around more and so will the virus. Other states that lifted restrictions quickly have had to go backward as their hospital capacity ran dangerously low and their cases jumped higher. We won't make that mistake in North Carolina," Cooper tweeted.

As an entire classroom of fourth grade children prepares to quarantine for two weeks, President Donald Trump claimed that children are almost immune to COVID-19, as reported by CNN. During an interview with Fox News, Trump said children were "almost immune" or "virtually immune" to the coronavirus. According to USA Today, those claims were taken down from his Facebook and Twitter accounts for violating its policy on spreading coronavirus misinformation.