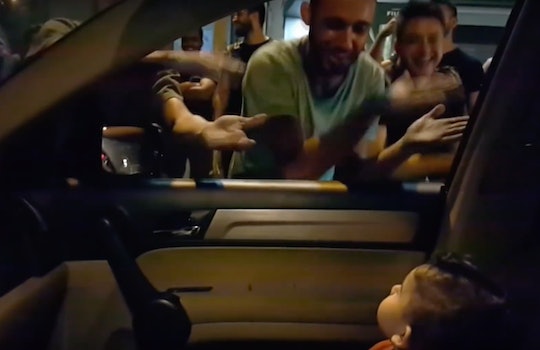 It seems as though everyone — yes, really, everyone — knows the contagious song stylings of "Baby Shark," that über contagious kid's anthem that's been stuck in your head for over a year by now. You might think that knowing every lyric to this song is an unfortunate side effect of parenting a young child, and yet, a group of protestors sang "Baby Shark" to a scared toddler in Lebanon to help make him feel better. Who knew watching that many hours of Pinkfong might qualify as a life skill after all.

During demonstrations in the Lebanese capital of Beirut, one mother and her toddler got stuck amid traffic, according to CNN. While in their car, Eliane Jabbour requested that the men stop yelling and clapping, as it was scaring her 15-month-old son, Robin. In response, the demonstrators joined around the car and started in with their own rendition of "Baby Shark," during which they even danced, performed the iconic arm movements to signal the grandpa, daddy and mommy sharks, and a few even began doing swimming motions in circles for a more complete effect.

Robin sat there looking stunned at first (honestly, who wouldn't be a little confused by strangers performing their own personal rendition of your favorite song?) but ultimately enjoyed it, Jabbour later said. "It was spontaneous," Jabbour told CNN. "He likes this song. He hears it many times at home and laughs."

In an interview with NBC, Elie-joe Nehme, who was one of the protestors, said that they just wanted to soothe the young boy, and make him feel better. "We sang 'Baby Shark' to make him happy,'" Nehme began, while Jabbour went on to tell the news outlet that her son was "surprised but not afraid" to hear the song playing out IRL.

Ultimately, the video was absolutely adorable, and so long as the mother and son were comfortable and entertained, it was a really sweet display of selflessness and generosity, amid a lot of political tension and escalating conflict.

Unrest has been building in Lebanon, according to Al Jazeera, which reported that the country is unhappy with tax inflations, particularly a new one enacted recently on WhatsApp conversations (it has since been repealed). Schools, universities and other businesses have since closed, as hundreds of thousands of demonstrators showed up to Martrys' Square in Beirut, the BBC reported, voicing opposition toward the economic and political structure of the country.

While, for many parents, it's important to introduce kids to civil actions such as protest, ultimately, each family has to decide for themselves how involved they'd like their children to be and when they want that to happen. Though today's scenario was a bit different — getting stuck in traffic is hardly a green light to participate in civil unrest, pun intended — it seems that many people rallied in an effort to make the situation as comfortable and enjoyable as possible for little Robin. There's definitely room for a little comic relief amid even the fiercest political dramas, and the people of Lebanon have proven that sometimes, taking care of one another is really the most profound thing you can do.

More Like This
Nebraska Judge Rules Two Mothers Cannot Appear On Their Sons' Birth Certificates
GOP Sen. Lindsey Graham Wants To Create A Nationwide Abortion Ban At 15 Weeks
The FDA Is Worried People Are Cooking Chicken In NyQuil
Quinta Brunson Got A Sweet Card From A Kid On Abbott Elementary After Her Emmy Win