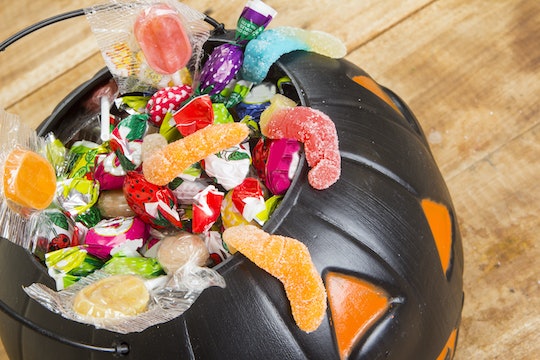 I am not lying to you when I say I got real joy from sneaking my kids' candy from their trick-or-treat bags when they were little. Especially since their candy was plentiful and fun-sized, so they wouldn't be able to catch me and I figured the calories from mini Snickers didn't count. Also who wants to commit to one flavor of chocolate when you can have four? It seems like one of those universal pleasures, eating mini Halloween chocolate bars, that everyone can enjoy. Everyone, except for apparently one person who wrote a PSA asking neighbors not to buy "cheap" Halloween candy. And, perhaps unsurprisingly, Twitter was all over it.

Twitter user @BestofNextdoor recently shared a message that was initially posted to the Rancho Cucamonga Neighborhood Watch Facebook page in California, but has since been deleted from a concerned member. Someone who takes Halloween dead serious, apparently. Or at least the consumption of ~*quality*~ Halloween candy that is apparently the right of all children who knock on doors in this "affluent" community.

"Over the last three years, I've noticed candy stock has become more and more diluted with cheap candy," the PSA read, according to @BestofNexdoor's screenshot. "I don't know if this trend is the result of higher bills or even the new constructions, but somehow cheap Halloween candy has infiltrated our community and it has to stop."

The candy crusader went on to point out that cheap candy might be fine for other communities (and I feel like people living in those other communities read that and were like, Hey!), Rancho Cucamonga is simply a cut above the rest and needs to do better. No "Dum Dums, Smarties, or Jolly Ranchers," if you please. And if you are wondering what you should be putting out if you are one of the muckity-mucks living in Rancho Cucamonga, don't worry this person will tell you...

"We are an affluent neighborhood and this status should be reflected in our candy provisions for Halloween," the PSA continued. "Standard, full or KING-size candy is the bar (pun-intended) we set for our community on Halloween. Just keep in mind that 4 or 6 of those fun-size bars equate to a standard-size bar when you dole out that candy to trick or treaters. And please, for God's sake, leave those Peep candies alone. No one, and I mean NO ONE, wants those terrible marshmallow tragedies." (Whoever this person is, they might not be totally wrong about Peeps. No thank you every day of the week, although I might be alone in this one.)

But here's where things go a little off the rails. The candy crusader moves on to attack the elderly for giving out money. Let that sink in for a moment. Apparently if they are going to give out money they are expected to "throw some quarters in there" unless they want their house to be skipped by the child-sized entrepreneurs who are ruthlessly scouting the neighborhood for their best opportunity. "It's a calculated loss to trick or treaters after you adjust for inflation and the opportunity cost of what they could have received elsewhere if they just skipped your house," the PSA read.

This post has elicited a strong response from Twitter users, most of whom are of the mindset that this is entitlement at its worst. As one user wrote, "Candy Karen is not having it anymore with these weak-a** selections when she steals her kids’ Halloween loot!" Meanwhile, another smartly suggested, "Sounds like the neighborhood kids got together to send a message."

One can only hope this note was a Halloween trick instead of a treat.