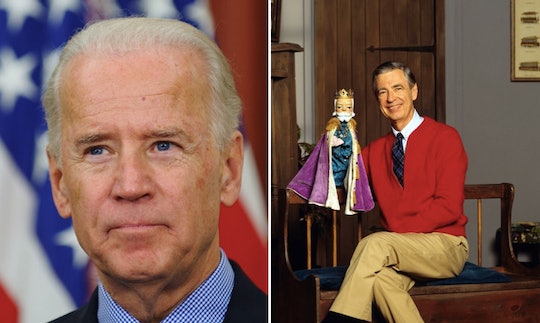 We Can Only Hope Our Next POTUS Is Like Mr. Rogers, America’s Most Beloved Dad

During Thursday nights' dueling town halls, one of President Donald Trump's staffers thought they would lob an insult at the Democratic presidential candidate. And boy oh boy, it really did not land because, as many have pointed out, comparing former Vice President Joe Biden to Mr. Rogers is a huge compliment.

Mercedes Schlapp, senior advisor for President Trump's 2020 campaign, took to Twitter on Thursday to share what she presumably considered to be a pretty great put-down on Biden — comparing him to one of the most beloved, iconic men in 20th century America, Fred Rogers. "Well @JoeBiden@ABCPolitics townhall feels like I am watching an episode of Mister Rodgers Neighborhood," Schlapp tweeted.

Criticizing Biden for being calm or "sleepy," as the often erratic president likes to refer to him, might not be the sick burn Trump's campaign staff seem to think it should be. Especially when people like Schlapp compare Biden to someone as beloved, as decent, as well-remembered as the cardigan-wearing, ever-positive hero Fred Rogers of Mister Rogers Neighborhood.

As journalist Erick Fernandez reminded everyone on Twitter, Mr. Rogers was the kind of man who stood against segregated pools by inviting Officer Clemmons, a Black man, to soak his feet in the kiddie pool with him. That's the kind of man any politician should aspire to emulate.

Another noted that, "with Joe 'Mr. Rogers' Biden in the White House you never have to wake up in the morning, instantly reaching for your phone terrified of what the president did while you slept." After four years of President Trump's mercurial tweets, frequent firing of White House staff members, mishandling of national issues like the coronavirus pandemic and racial injustice, a calm president doesn't sound so bad.

Ultimately, as one person put it while sharing a video of Mr. Rogers speaking to the U.S. Senate Subcommittee on Communications in defense of public television in 1969, "if the Right is correct and Biden is like Mr. Rogers, then there is still hope for this country."

Some people are feeling nostalgic for the "sense of calm" they had watching Mr. Rogers as children, and if a Biden presidency can bring that back then "sign me up." Calm is definitely not a word that would aptly describe the Trump presidency.

Finally, one social media user pointed out that the comparison between the two men can be nothing but a compliment. "Mr. Rogers has the most calming voice and energy. Watching Tom Hanks play him amazingly well, reminded me how calm I always felt as I watched Mr. Rogers all the time. Comparing Biden to Rogers is a huge compliment to Joe."

If Biden is elected president this November, we can all hope that he truly is like Mr. Rogers. A calm, dependable voice of reason in a world that feels like it's spiraling out of control. That really would be a beautiful day in the neighborhood.