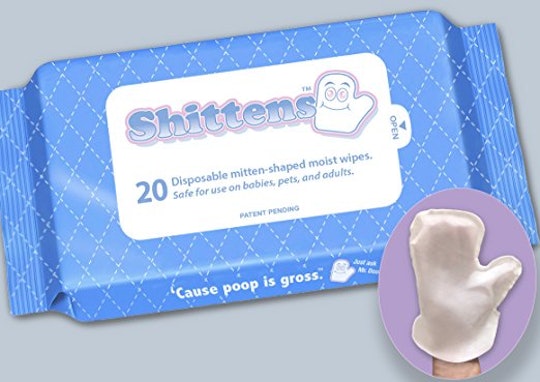 Sure, wiping your baby's tush with regular, square-shaped wet wipes works for most parents. But when your baby has a huge blowout, the average wipe may not be powerful enough to clean up the whole mess while sparing your hands from an accidental hand facial comprised entirely of your child's poop. And for that reason, as Kidspot reported, there is now a product on the market called Shittens, which are disposable mitten-shaped moist wipes.

As explained on Shittens' website: "While old fashioned, square wet wipes put your hands at risk for all kinds of accidental fecal contamination, the genius mitten shape of a Shitten provides not only safety from poop, but on a larger scale, emotional peace of mind." Now, most parents get over baby poop's ick factor by the time their first kid is about a week old. But for all the really bad poopy blowouts where you would wind up using two or three (or 10) wipes anyway, a Shitten Mitten might just make things easier.

If you're wondering why the name of a product seemingly designed for babies has a curse word in it, it's because the wipes are actually designed for people of all ages. According to Shittens' website, the wipes are FDA-approved, and they are safe for babies, adults, and pets. However, like most disposable wipes, they are not biodegradable or flushable.

If you're reading this and secretly thinking, "You know, Shittens could actually come in handy..." there is some bad news: the product is currently sold out. An old listing of the product on Amazon listed the price as $34.30 (plus $6.99 in shipping) for a pack of 20 Shittens, which comes to $2.06 each. Is your baby's tush really so precious that you would pay $2.06 each time they drop a deuce? OK, fine, baby tushies are pretty precious. But like, there are definitely better deals.

The product's other Amazon listing looks a little different — it is flooded (pun intended) with reviews, many of which praise the product for being functional as well as hilarious.

"Gave these as stocking stuffers to my teenage kids and they were a hit!" commented one user.

"Bought these as a joke and ended up actually using them. They work great if you run out of regular wipes!" added another.

"I bought these as a gag gift but they are totally functional. My buddy got them during the gift exchange and has kids. Swears he won't go back to regular baby wipes," reads another review.

Other people used the review section to crack some pretty layered jokes.

"I've been compared to a living as-seen-on-tv commercial. Life is simply too hard for me. Shittens allow me to avoid messy situations in the bathroom," wrote one user. "Far too often I find myself with poop running down my legs, the wall, and my dog. Thanks to Shittens, all I do is throw more money away on items that help me stand and breath at the same time."

"Finally something I can use to clean up after myself. Having spent most of my life with a severe toilet paper allergy, I had resigned myself to simply having to wipe up with my hand," reads another joke review. "This has resulted in untold mental anguish. I have been unable to land a job, or a girlfriend. Whats [sic] worse is that everyone who knows me called me stinkymcghee. Now finally, with Shittens, I don't have to walk around with poop particles on my hands anymore. Match.com here I come!"

All jokes aside, some reviewers pointed out how the Shittens could be helpful for people with physical disabilities.

"As funny as these might seem, they are fantastic for individuals with physical disabilities like cerebral palsy," reads one review. "I wish they were cheaper and could benefit more people to make them more independent."

But despite the jokes and the praise, some people noted that the product is much thinner than it seems.

"The mitten is so thin that fecal fluid soaked right through. Because you wear it like a glove and don't fold it over, your hand is only a thin layer away from fecal matter and you can see the remnants inside the glove and smell it on your hands," one user wrote on Amazon. "This is a fundamental flaw that make this product less useful and much more expensive than standard baby wipes."

While everyone who has tried Shittens may not be able to agree if the product is effective, it certainly seems to be effective enough at giving everybody — parents of babies, especially — a good laugh.

More Like This
First Look: The New Jujube x Lilo & Stich Collaboration
Here's When Your Baby Might Start Sleeping Through The Night For Real
Can You Help Your Baby’s Hair Grow?
Baby Not Napping At Day Care? These Reasons May Be Why