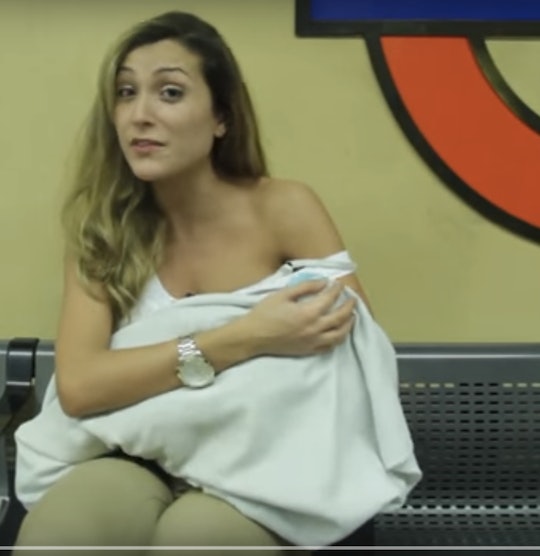 In 2015, it's surprising that public breastfeeding is a controversial issue. But many mothers are shamed for breastfeeding in public and suffer harassment from strangers for just trying to do something natural their baby: feed them. The YouTube channel Trollstation conducted a public breastfeeding experiment filming people's reactions to a mother breastfeeding her baby on London's Tube to gauge how people feel about mothers who publicly breastfeed, and what happens will totally surprise you.

At first, the breastfeeding mom (who is "feeding" a baby doll under a blanket, not an actual baby) is told by a male passenger that he feels "uncomfortable" because in England,

We have principles and morals in this country.

When the "mom" counters that she's simply feeding her baby, the two get into a heated debate, where the male passenger grows more and more angry and demands that she, "feed your baby before you come out! Or Express!"

Express! Got to love those English expressions, man.

Anyway, back to the experiment. As the agitated man begins to curse at the breastfeeding mother, other passengers come to her defense, including a male and female passenger who speak up, claiming, "She has every right to do that," and if the passenger is so bothered by the indecent exposure of a woman's "tit," as he so eloquently calls the woman's breast, that he can "move away." As many people on the carriage (Tube car) get involved in a melee arguing over the decency of breastfeeding, a cameraman reveals himself and the jig is up.

So, what does this video show about people's reactions to public breastfeeding? A couple of things. First, even though the man in this video is very clearly acting to elicit a response from unsuspecting Tube-takers, people do continue to display what actress and breastfeeding advocate, Alyssa Milano, calls an "archaic" attitude about breastfeeding. Second, this archaic attitude about breastfeeding provides disappointing evidence that to some people, women continue to remain the "second" sex, shamed for doing something only a woman can do: produce food to nourish another human.

Though this video sheds light on these antiquated ideals, the most uplifting moment comes from the fact that other passengers don't agree with anything that the man is saying. Not everyone feels that breastfeeding in public is "indecent" or "disgusting," only some people maintain an archaic attitude toward something so natural for mothers. The passengers who step up to defend the breastfeeding mom show how important it is to advocate and speak up when a woman is being harassed for public breastfeeding.

Plenty of my own friends have had to soothe their children by breastfeeding in public. They're not doing it in hopes that people will judge, or even worse, publicly condemn their behavior. They're doing it because they don't have a choice. Their baby is crying. Their baby is hungry. Their baby is upset and needs the comfort of feeding to be soothed and calmed. As a mom, are you really going to let someone else's judgment stop you from feeding your hungry child? No. And the sooner we let go of those antiquated beliefs that women are doing so for "attention" or to unsettle or disrupt fellow passengers, the better off we'll all be.

Unfortunately, women can't always "express" on a schedule and have a bottle of breast milk at the ready. Parenting just doesn't work like that. So, wherever you fall on the spectrum of debate surrounding public breastfeeding, bear in mind that as a parent, you're taking each moment as it comes, and doing the best you can. I'm down to support that.