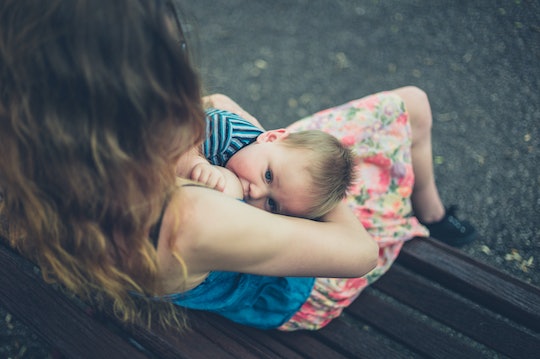 Breastfeeding remains one of the most natural things a mother can do to feed her child, but that doesn't mean it's easy. First of all, it can be difficult for a mother physically, but then there are also all of the other road blocks thrown up in her path. Trying to feed your baby when you go back to work is laborious, as is trying to figure out how to breastfeed in public without feeling judged or ostracized. The latter is a valid concern, because as a new survey has confirmed, public breastfeeding still appears to be a taboo topic in the eyes of many and, quite frankly, that needs to change.

Milx.Mom recently conducted an online survey with Pollfish to get a read on how people felt about public breastfeeding for International Breastfeeding Month, which kicks off tomorrow, Aug. 1. The poll came up with several interesting findings. For instance, breastfeeding is incredibly popular with young moms, with around 79 percent of mothers between the ages of 18 to 24 reporting that they breastfeed their child. There also appeared to be something of an income divide, with 80 percent of high income parents reporting they breastfeed compared to 61 percent of lower income parents, which is still a high number.

These statistics seem to suggest that public breastfeeding is still, somehow, a controversial issue.

Similar research conducted by the U.S. Centers for Disease Control and Prevention (CDC) in 2018 also found that not everyone fully agrees with public breastfeeding. According to the CDC's survey of more than 4,000 respondents, 68 percent said they "believe women should have the right to breastfeed in public spaces" and 67 percent said all public buildings should have facilities for breastfeeding and pumping milk.

Though the CDC's findings aren't terrible, they're not ideal and highlight the need for more awareness — and that applies to all parents and breastfeeding mothers as well. Because, perhaps most distressingly, Pollfish's survey found that many women are dealing with breastfeeding struggles without even knowing their rights. In fact, total of 43 percent of mothers weren't sure about their legal breastfeeding rights.

The reality appears to be this; although slowly, more and more people are starting to realize that women need to be able to breastfeed or pump in public. If your little one needs to eat every three hours or so, how exactly are you meant to get anything done if you can't simply stop to feed them? And I think everyone can agree that the days of hunching over a public toilet really need to stop. Perhaps this new research will help to highlight the fact that people need to do more than just say they are comfortable with public breastfeeding — they need to actually be comfortable with it.