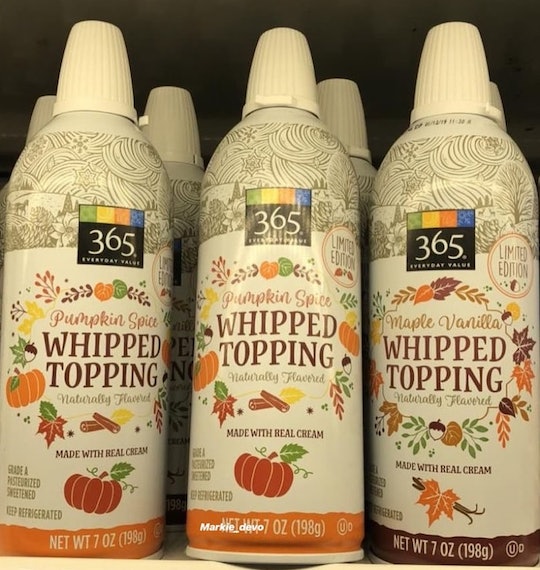 As I sit here and type this morning, it is creeping up on 90 degrees with a projected high of 95, and I am ready for fall. The humidity is at "walking through a cloud full of rain" levels, and my hair has never been frizzier. I'm ready for cozy sweaters, booties, hot tea, and pumpkin spiced everything. Thankfully, this year, stores have been rolling out the gourd goodness earlier than ever to appease the pumpkin-loving population. And the latest is Whole Foods' new pumpkin spice whipped cream — just the idea is so soothing to my very basic soul.

I don't know what fall even is if I'm not living my best PSL life. That means that I hit up Trader Joe's for their pumpkin butter, I smear butter on my Dunkin Donuts' pumpkin muffin, and I sip maple pumpkin spice lattes from my pumpkin shaped mug while dreaming of apple picking and crunching leaves underfoot. I haven't even mentioned pumpkin spice wine, Cheerios, and warmly-scented candles that fill my home with the fragrance of the gods. To say that people are excited about this pumpkin spice whipped cream would be putting it mildly. On Instagram, comments are ranging from "I need this in Germany," to "Brb, cancelling Planet Fitness on Monday." The can appears to come in a 7-ounce size and is labeled as being made with "real cream." There is no information out yet on the price or if it's only in certain stores, but it's obviously worth a trip to your local Whole Foods to find out.

I can't believe I've never heard of pumpkin spice whipped cream before now. It seems such an easy leap from all of the other products bearing the spices of the season, but aerosol whipped cream that you will inevitably spray directly into your pie hole was an untouched market. Thanks to Whole Foods, those sad days are long gone. Now when you're hungry in the middle of the night and have eaten at least one row of pumpkin spice Oreos, you can just unhinge your jaw and spray in your favorite whipped topping as a complement to your cookie treat.

According to NBC News, the pumpkin spice craze is real and lucrative. The website reported that "Americans spent $360 million on pumpkin spice-flavored foods in 2015." Still not sure how that amount sounds? Think of it the way NBC News phrased it — "If the top five celebrities on Forbes' 2017 rich list pooled their earnings for the year, they could fund Americans' pumpkin spice habit for the season." Radical redistribution of wealth or just politely paying it forward? You decide.

Regardless of how you take your pumpkin spice, one thing is for sure, it's big business and it's incredibly delicious. But this Whole Foods whipped cream is also only for a limited time, so get out there and lick up every last bit of spicy goodness before it's too late.