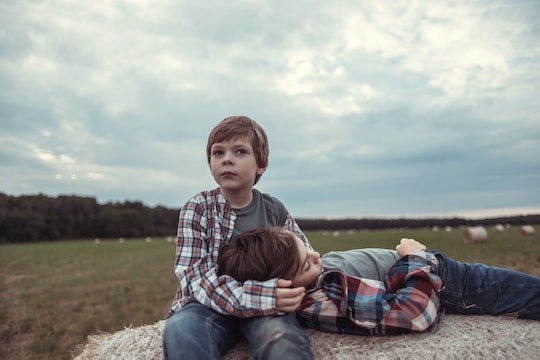 Teachers Are Punishing Kids For Calling Body Parts By Their Correct Terms, & It Has To Stop

My kindergartener came home one day laughing as he pointed at his penis and said, “Look at my wiener!”

“First of all, that is your penis,” I told him. “And why do I need to look at it? Is there something wrong? Did you hurt yourself? Why is this an appropriate time to look at your penis?”

In my house, we don’t give body parts — especially sexual anatomy — nicknames. My son knows this. He also knows it’s not appropriate to just whip out his penis or demand someone to look at it. He is welcome to look at, play with, and enjoy his penis in private. Nudity is absolutely acceptable in the house, but using any body part to taunt someone or make them feel uncomfortable is not. Touching someone else’s private parts without permission or touching oneself while around others is not appropriate either. My son is 6. We have been talking about all of this since he was a toddler; I have talked early, openly, and confidently about consent and body parts with all of my kids.

But many people are quick to tell kids that calling body parts for what they are — vulva, vagina, penis — is wrong. Punishable, even.

Mike Reynolds, the person behind Everyday Girl Dad who is trying to change the way men view masculinity and gender norms, recently posted on social media that his 7-year-old was angry about being told penis and vagina were inappropriate words to describe body parts. In this case, his daughter’s peers were the ones policing her language, but in other instances teachers have told her the same thing.

If a child needs to report inappropriate touch, they need to be able to accurately describe what happened.

Using the correct terminology is partly a matter of public health.

“Body awareness talks are the earliest conversations parents can have with young children to support their health and safety,” sex educator, Melissa Carnagey of Sex Positive Families told Huffington Post for an article titled “Why You Should Teach Your Kids The Real Words For Private Parts.”

If we don’t use the proper words or answer kids’ questions with at least an attempt at seeming to be comfortable, we create a sense of shame, as if “those things” and that part of ourselves should be kept hidden. This may also lead to keeping secrets hidden. Sadly, 1 in 5 girls and 1 in 20 boys will be victims of childhood sexual abuse, per U.S. Department of Health and Human Services’ Children’s Bureau data. As Carnagey reminds us, if a child needs to report inappropriate touch, they need to be able to accurately describe what happened and where so they can be understood by those trying to help.

Schools aren’t helping. Sexual education in the United States is comical at best. As an advocate I am fighting for LGBTQIA+ inclusive sex-ed curriculums, but the least we can do is teach consent and safe sex instead of abstinence, which is what is currently being taught in 31 states across America, as the Sexuality Information and Education Council of the United States states. Yet, 95 percent of Americans have sex before marriage. And half of pregnancies in this country are unplanned. The U.S. Department of Health & Human Services reports that in 2016, “there were 20.3 births for every 1,000 adolescent females ages 15-19.” Eighty-nine percent of these births happened outside of marriage. These numbers don’t include the tweens and teens younger than 15 who give birth or the number of tweens and teens who got pregnant and miscarried or chose an abortion.

Clearly people (kids) who are capable of making babies are having sex with each other, and it’s pretty obvious they don’t know how to prevent the making of said baby.

We need to talk about sex in a way that strips away the shame and stigma. People aren’t comfortable saying the word clitoris, let alone acquainted with where it is. Fifty percent of men and 44 percent of women couldn’t find the vagina on an anatomy diagram in a study done by The Eve Appeal. You know what would help this? Talking about body parts in matter of fact and nonjudgmental ways will help.

In Europe, sex is talked about in age appropriate ways from preschool all the way through high school. A 2013 report on sex education from the European Parliament showcased schools that included consent, navigating relationships, and communication before, during, and after sex. The countries with early and comprehensive sexual education had teen pregnancy rates of 5 out of 1,000 for 15-19 year olds.

Knowing these words gives children greater autonomy over their own bodies.

If you are struggling to start these important and sometimes uncomfortable conversations with your kids but want to have more meaningful discussions with them about body parts and safe touch, reach for a book. My Body! What I Say Goes! and Let’s Talk About Body Boundaries, Consent and Respect are both written by Jayneen Sanders. These picture books empower kids to get the language right about their bodies while learning ways to communicate what is safe and unsafe touch.

“Our kids, at the ages of 7 and 9, know that bodies aren't something to be ashamed of,” says Reynolds. “They know the names for parts of the anatomy and understand that these words are completely normal. So they get upset when words we use at home as part of our own sex and health-education discussions are deemed inappropriate or bathroom words, et cetera. Knowing these words gives children greater autonomy over their own bodies.”

I was a victim of childhood sexual abuse. I am adamant about teaching my kids to use the proper names for their body parts. I want them to love and respect their body in a way that transfers respect to someone else. It’s too easy to joke around with goofy or code words for penis and vagina. Our sexual anatomy can give us lots of pleasure, and I will continue to expand the conversation with my kids that will empower them to engage in enthusiastic and safe, consensual sex. But our private parts are not toys for others to play with whenever they want. I want my kids to know they are allowed to enthusiastically say “no” if someone wants to touch them. They also need to respect hearing the word no.

That starts with hearing the words vagina and penis.