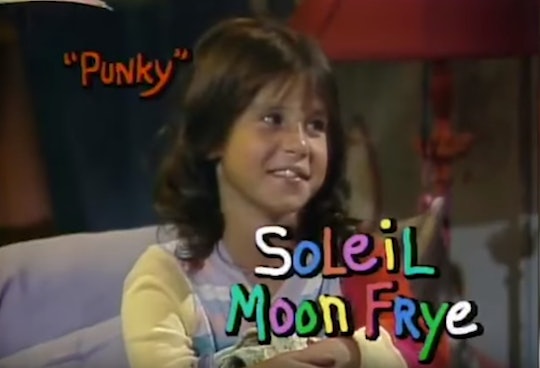 The story behind the hit series Punky Brewster from the 80s is actually kind of a heartbreaker. A little girl gets abandoned by her parents and taken in by a cantankerous photographer in Chicago. Not exactly all sunshine and roses. But that show had a certain something that made it truly delightful, so much so there's a Punky Brewster reboot in the works.

Perhaps the secret to Punky Brewster's charm was wrapped up in the series' star Soleil Moon Frye. Well, that and her multi-colored outfits that I can tell you were absolutely all the rage for kids at the time since I was one of them. The original series ran from 1984 to 1988 and was a massive hit across North America, so much so that NBC Universal's upcoming streaming service Peacock announced on Thursday that it is planning a reboot, according to Entertainment Weekly. And, naturally, what would a reboot of Punky Brewster be like without the original Punky herself?

That's right, Soleil Moon Frye is set to return. According to a statement from NBC, "in this continuation of the iconic 80s sitcom about a bright young girl raised by a foster dad, Punky (Frye) is now a single mother of three trying to get her life back on track when she meets Izzy (Copeland), a young girl in the foster system who reminds Punky a lot of her younger self." Color me excited.

Of course I'm not the only one who is excited about the upcoming reboot. Moon Frye herself said in a statement to The Hollywood Reporter that she is "beyond thrilled" to revamp her character. "It is with great love for the amazing people who were such a pivotal part of creating the Punky magic that I will do my very best to honor their memory as we once again share Punky with the people that love her and a new generation discovering her for the first time," she said. "To our incredible fans who have stood by us, thank you for believing in me and I will do my best to make you proud. I love you. Punky Power forever!"

Moon Frye told People in November that Punky's ex-husband will be played by Freddie Prinze Jr. in the series pilot, another blast from the past.

While Peacock has given the new series the green light, there's still no word yet on an official release date. So we will just have to keep the Punky Power going strong on our own until it comes out.