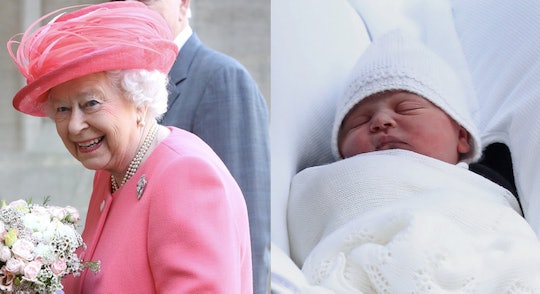 Members of the royal family live the kind of lives that most people can only dream about. There are jewels and crowns and gowns galore, and that's just the beginning. Case in point: Queen Elizabeth II just met Prince Louis for the first time since he was born in the most fabulous way ever. While most great-grandmothers or other extended family members simply wait until they can arrange the time to drive or find a good flight deal to meet the newest addition to their family, the royal family does things a tad differently than us common folk.

When Queen Elizabeth II was ready to meet her sixth great-grandchild, she didn't just hop in a taxi. Oh no, she boarded a "40-minute helicopter ride from Windsor Castle to Kensington Palace," as Cosmopolitan reported. Ya know, just a casual family get-together featuring luxurious air transportation and one of the longest-reigning monarchs in British history. No big deal.

Of course, the 92-year-old couldn't arrive to meet the little prince empty-handed, could she? Well, Us Weekly reported that the queen was reportedly spotted with "a small bouquet of yellow and white flowers in her hand," because Queen Elizabeth knows a thing or two about etiquette, y'all, and she isn't messing around at all.

Basically everything Queen Elizabeth does is fabulous, and her visit to see young Prince Louis is no exception. Now, in case you missed it, the latest addition to the royal family was born on April 23, and news of his arrival quickly took the world by storm. Of course, it wasn't just the little prince that people were talking about. A mere seven hours after he was born, mom Kate Middleton left the hospital with her newborn in hands, looking absolutely flawless.

So really, it feels only natural that the queen would arrive to meet her great-grandson also looking flawless and doing so in an absolutely unforgettable way, too. Now, she might have gotten to see the littlest member of her family, but her husband, 96-year-old Prince Phillip reportedly wasn't able to do so alongside her. According to CNN, Prince Philip has been laying low to recover from a recent hip surgery. According to CNN, Buckingham Palace released a statement about his current well-being:

His Royal Highness The Duke of Edinburgh left King Edward VII's Hospital at midday today (Friday), following a hip replacement operation last week. The Duke will continue his recovery at Windsor. His Royal Highness would like to convey his appreciation for the messages of good wishes he has received.

So far, it looks like Prince Philip has yet to meet Prince Louis.

But, it's still early. Even though it may seem like Prince Louis has been here forever, he was only born a little over a week ago and his parents and siblings are likely all still settling in to life as a family of five. Prince Philip will have more time to meet his great-grandson, and maybe he'll get to when the royal family has a little less going on. Not only are Prince William and Middleton bonding with their third child, but they also just celebrated their seventh wedding anniversary on April 29. And their only daughter, Princess Charlotte, turned into a budding young 3-year-old today, on May 2.

Yeah, there's a lot going on across the pond, and the upcoming royal wedding between Prince Harry and Meghan Markle on May 19 is just the next big thing to happen. Odds are, Queen Elizabeth will make just as memorable of an entrance then as she did with her first meeting with Prince Louis.