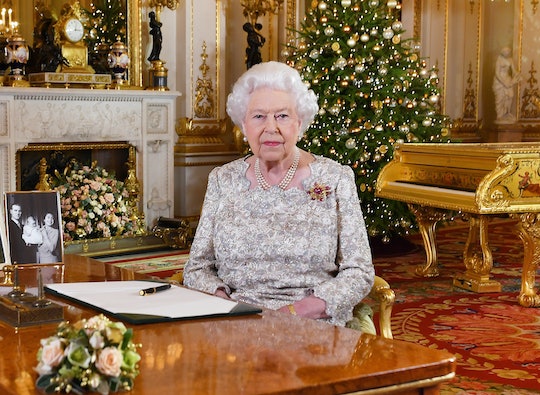 Every year, Queen Elizabeth heads to her Sandringham estate to celebrate the holidays with her family. Now, when you picture holidays in the country with your own family, you might think of comfortable clothes and chilling out by the fire — that is not how the holidays look for the Queen. In fact, Queen Elizabeth has several Christmas outfits that involve a whole lot of coordination and planning, and presumably not even one pair of flannel pants.

Queen Elizabeth's dresser Angela Kelly recently wrote a book about her experience called The Other Side Of The Coin: The Queen, The Dresser and The Wardrobe. In it, Kelly discusses life behind the scenes for the longest reigning monarch in history, including what her Christmas traditions tend to look like. The Queen herself endorsed Kelly's book, so you know she's not just gossiping out of hand. And let me tell you, if you feel like your holiday plans are keeping you busy, it's probably tame compared to the Queen's itinerary.

"The Queen is just as busy as she would be in London, with more guests to entertain," Kelly wrote in her book, according to an excerpt published in People. "There may be several outfit changes in one day — it could be as many as five or even up to seven."

It's not simply her own outfits she's expected to consider when planning for her many social engagements, like dinners and afternoon teas, she also puts thought into coordinating with the royal ladies-in-waiting. If you're curious about what a lady-in-waiting actually does, they are essentially close confidantes and trusted personal assistants to the female members of the royal family, BBC History explains. And when they are on hand over the holidays, they are expected to arrange outfits for their own royal ladies that will coordinate with whichever choice the queen herself has made so there is no clashing.

"Once Her Majesty has chosen her dress for dinner, a handwritten notice is pinned up in the Dressers’ Corridor detailing what she will be wearing, so that the Queen’s ladies’ maids can select an appropriate dress for the lady they are looking after," Kelly explained in her book, according to Marie Claire.

While this might seem pretty formal, not all of the assumptions people make about protocol with Queen Elizabeth are necessarily true. Kelly explained in her book that the Queen does not expect people to automatically curtsy or bow when they meet her, it's just something that naturally tends to happen out of respect, as The Telegraph reported in 2014.

The next time you feel a bit of jealousy at the idea of a royal Christmas, remember this: You get to wear pajamas all day and eat leftovers on the sofa.

More Like This
Queen Elizabeth II's Most Romantic Quotes About Prince Philip
Queen Elizabeth's Corgis Will Be "Spoiled Rotten," According To Prince William
Prince Louis Is Asking His Parents Questions As He Tries To Understand Queen Elizabeth’s Death
Scott Calvin Is Ready To Retire In The Santa Clauses Series Coming To Disney+