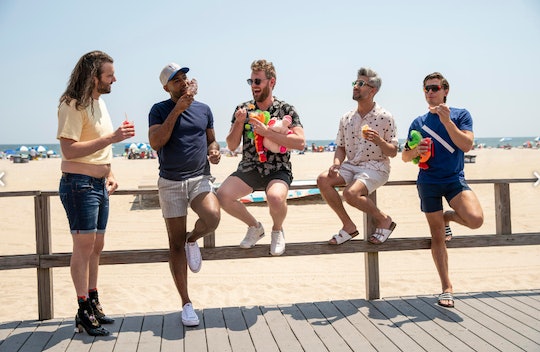 You already know it's going to happen, but the Queer Eye Season 5 trailer has confirmed that you're definitely going to bawl your eyes out watching the Fab Five back in action once again. But one episode of the newest season might be especially emotional for moms or any parent who's ever felt inadequate.

The fifth season of the Netflix series will air on June 5 with the Fab Five returning to help people who are struggling and make over their entire lives. Not just their appearance, which stylist Jonathan Van Ness covers beautifully, or their fashion with Tan France. But there's also chef Antoni Porowski stepping in to give people the confidence to cook delicious, nutritious food and, of course, Karamo Brown dealing with their entire lifestyle. Cap it all off with Bobby Burk giving their home a makeover and fans of the show get to watch a life truly transformed in the most uplifting way.

In the official trailer for Queer Eye Season 5, it looks like the guys are going to give a gay priest a makeover, a woman who has always been teased for her height, and a mom of a little girl, who admits that she's "not sure how to take care of a 3-year-old." "I always feel inadequate," she says, which is something many moms can probably understand all too well.

This mom, who is not named in the trailer but is already seriously tugging at my heartstrings, admits that it feels like "there doesn't seem to be enough hours in the day." "I feel like I wasn't there for her," she says in the trailer, at which point it looks as though Karamo Brown is hugging her, and you know the Fab Five are going to make it right for this mom.

Mom guilt is an invisible, pervasive constant for many mothers, who tell themselves, as this mom does, that they're simply not doing enough. That they're inadequate. Seeing the Fab Five address mom guilt head on and try to find coping mechanisms won't just help this young mom, but will almost certainly give others the tools to learn to be gentle with themselves as well.

All 10 episodes of Queen Eye Season 5 will be available to stream on Netflix on June 5.