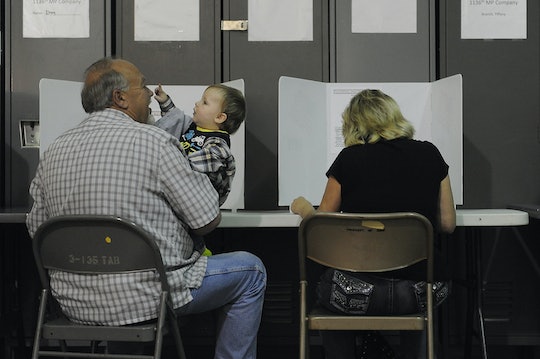 "Hillary Clinton? I love Hillary Clinton. She needs some friends." Contrast 3-year-old Emma's insight to 3-year-old Emery's "Mommy, I'm seriously nervous about Donald Trump," and you'll gather just how unsettling Trump's likely election truly is. Quotes from kids about the election show that they especially realize that this shouldn't be happening.

The app LittleHoots was developed by Lacey Ellis — a mother looking to give a platform to children's distinct voices. However silly, the comments, specifically those about the election, can be quite cutting. Quotes like the ones above, along with others such as "Donald Trump?! No he shouldn't run the country. It would be bad. If the lights turned red, people would just go anyways" really sum up, in their own, simple way, what many Americans are currently thinking: That, regardless of policy and politics, Trump sets a bad example for children, and his striking distance to the presidency is baffling.

9-year-old Charlotte, who's the daughter of a Romper writer, had many thoughts on the matter, including:

My friend said she'll have to move back to the Dominican Republic if Trump wins and then I can't take the bus with her.

This sad observation was met with another one that even her mother "couldn't explain" to her:

I don't understand why anyone would vote for Trump.

Users on Twitter shared their own thoughts, and the thoughts of their children, too:

Parents are doing their best to assure their children that things will be OK after the election, though many are still at a loss, wondering how they'll be able explain it:

As families are forced to come to terms with what a Trump presidency might look like, they're holding their children close, and listening to them. Though Nickelodian's presidential prediction polling children predicted Clinton the clear winner, giving 53 percent of votes to Clinton, 36 percent to Trump, and 11 percent to Gary Johnson, the adults' election had starkly different results. Whereas children perceived Trump as hateful and dangerous, his final poll numbers have indicated that voters feel otherwise, apparently.