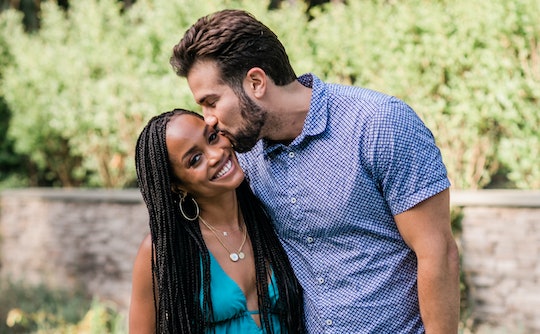 As is customary in the Bachelorette universe, Rachel Lindsay (a former Bachelorette) and her husband-to-be (Bachelorette winner) Bryan Abosolo were sitting drinking rosé by a pool in the Hamptons. It was an intimate moment shared by several reporters. I think the idea was for us to talk about Rachel's upcoming wedding and her registry on The Knot's website (Bryan wants a Vitamix — obviously), but I just wanted to talk Bachelorette — the most recent season, that is, in which 30 competitors tried to win over Hannah B. I have a lot of opinions about Hannah's infamous season and Rachel Lindsay — it feels right at this point just to call her Rachel — has never been known to demure when it comes to speaking her mind. Come on, Rach, give me the inside scoop. What do you really think of Hannah B.?

"I think that the journey of Hannah has been beautiful," is the first thing Rachel says, and I immediately know we are going to be on the same page. By this time I have consumed two and a half glasses of wine and it is only Rachel's overwhelmingly chill demeanor that keeps Long Island tethered to the Sound.

Listen, at 24 I was dating a guy where the red flags were waving all in my face, and I couldn’t see it

"I remember watching her in the end," Rachel says, referring with Thomas Hardy-like seriousness, to the finale, which ended in a breakup.

Upon discovering her new fiancé, Jed, was a lying liar-face with a secret girlfriend (his defense: they exchanged “I love you”s but weren't exclusive), Hannah ended the engagement to the general jubilee of the millions watching from their couches and sports bar viewing parties. Rachel recaps the moment: "She said something like, 'I feel like you took my journey away from me,' and I thought, 'No Hannah, he didn’t.' Because although it’s not what you wanted, you gained so much more just from this self awareness and the respect and the strength, and she said it: 'I learned that I’m stronger than I think.' And you saw it in her."

It's true Hannah B. did not have the typical Bachelorette "journey," as the show terms it. The Bachelor franchise tends to be kind of aggressively myopic when it comes to the "and then they lived happily ever after" style ending. But as Rachel points out, Hannah's season was actually a lot more interesting than that. Instead of a beaming couple basking in the glow of true love on their Happy Couple weekend, the audience watched Hannah drop her engagement ring on the table in front of Jed when he failed to convince her with his “but she means nothing to me” defense.

Watching The Bachelorette this season was a little like watching a dramatic interpretation of my love life over the course of my 20s — with Hannah learning in a few short weeks the hard-won lessons it took me years of dating jerks to fully get. Why did Hannah keep Luke P. around for so long even after he gaslit and manipulated her? (Probably for the same reason that, when I was 24, for nine months I continued to "date" a guy who called me to hang out exactly once a week and whose friends I never met.) "Listen, at 24 I was dating a guy where the red flags were waving all in my face, and I couldn’t see it," Rachel says, pointing out that when she started the show at 31, she had already done “the Luke P. relationship” in her life, so she knew how to spot it.

But the beauty of Hannah, which may be more relatable to other people, is that sometimes people just have to learn things in their own time

The drama and excitement of Hannah's season wasn't in watching a young couple fall in love — it was in watching her grow into her own strength as an independent woman. And I’m sorry but there are way, way, too few romantic stories that end this way. Plus, it was fun and dramatic as hell.

If Hannah had sent Luke P. home at the first sign of trouble, he would never have told her he’d dump her if she had sex. And then we never would have gotten the now iconic “I f*cked in a windmill,” retort on the far side of her overnight date with Peter in said windmill, and, even better, the anthemic “I don’t owe you anything.”

If Luke P. had never decided to show up at that last rose ceremony after being soundly dismissed, we never would have seen Hannah physically move the podium to get him out of the way. “And when she finally got it, when he said what he said and the lights went off, then he came back and she takes the podium and moves it, we got to see Hannah really stand up for herself, that we wouldn’t have if she sent him home earlier,” Rachel says. Her words reflect as true in my rosé. The catharsis of watching Hannah reject men who disrespected her was something akin to what I felt watching my little brother graduate high school.

“But the beauty of Hannah, which may be more relatable to other people, is that sometimes people just have to learn things in their own time — ‘But don’t worry, don’t doubt me, I’ll get it when I get it.’ And that’s Hannah,” Rachel says.

Hannah hasn’t even hit mid-twenties yet, she’s got plenty of time to get it. Rachel says when she was 24 she couldn’t have been Bachelorette. But now, at 34, she's ready for her “and then they lived happily ever after” ending — she and Bryan are getting married in a private ceremony in August, 2019.