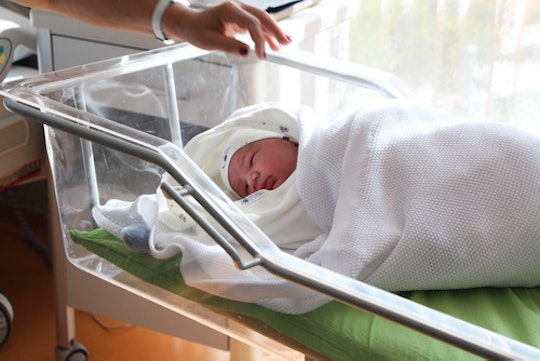 Why Raising A Gender-Less Child Is The Future

Earlier this week, a baby named Searyl Atli Doty made history when the Canadian government gave them a health document that did not contain any sex identification, reportedly making Searyl the first gender-less baby in the world. The infant’s parent, Kori Doty, is a non-binary transgender person, and they explained their reasoning in a statement via the campaign group Gender Free I.D. Coalition : “I do not gender my child. It is up to Searyl to decide how they identify, when they are old enough to develop their own gender identity. I am not going to foreclose their choices based on an arbitrary assignment of gender at birth based on an inspection of their genitals.”

The story quickly went viral, and many in the LGBTQ community praised the Canadian government's decision to issue the card as an important step in the way we approach gender identity as a society. As the Gender Free I.D. Coalition explains on their website. (It’s worth pointing out that the terms “sex” and “gender” are not interchangeable — a person’s sex is determined by biology, while someone’s gender is related to their identity.)

“Everybody’s gendered identification starts with a birth certificate. The state ascribes a sex/gender marker at birth, and then ‘certifies’ that gender. But no one knows a baby’s gender at birth since gender identity takes years to be known. So the state is predictably wrong for trans people, whether they identify as the ‘other’ M/F gender or whether they are non-binary. And it may be wrong for intersex people. The state knows it is certifying as true something it cannot know to be true. Trans and intersex people bear the burden of gendered ID that doesn’t match their gender.”

Unfortunately, not all people have reacted positively to the news of Searyl's undetermined gender. Some people on Twitter called the move “dumb” and “unnecessary,” while others implied that Searyl will suffer psychological ramifications because they were not “assigned” a gender at birth. These types of responses are frustrating because they miss the point entirely: gender is so rooted in individual identity, that it’s impossible for a baby to know their true sense of self at birth. Therefore, it’s important to allow children the freedom to figure out who they are on their own.

Although our society’s notion of gender is rapidly evolving, there are still many dated traditions and ideals that we continue to cling to. For proof, look no further than gender reveal parties, where parents cut into a cake to unveil pink or blue frosting, or bash a piñata until pink or blue streamers explode. While it’s understandable that many parents would want to cling to a tangible piece of information about their unborn baby, the child’s sex doesn’t necessarily dictate their gender. So while your 18-week-ultrasound might be able to detect a penis, that doesn’t mean that you’re going to be raising a son. For some people, this is hard to grasp, but why?

Waiting for your baby to figure out their gender identity for themselves isn’t silly. It exemplifies compassion for your child, as well as an understanding of where we might be moving as a society.

As someone who is approaching the final two months of pregnancy, I’ve become more and more aware of our society’s preconceptions — and misconceptions — about gender. Shopping for clothes can be a struggle when it seems as though every item on the racks is pink or blue. And it’s not that the color pink is something to be damned forever — there are plenty of little magenta and rose-colored onesies carefully folded into the bureau in our nursery — but I bristle at the notion that pink is a “girl’s color.” It feels dated, and yet so many people still abide by those rules.

Although my husband and I found out the sex of our baby at our 10-week blood test, keeping an open mind has been increasingly important to me. When my uncle joked that having a daughter meant ballet classes instead of football practice, I raised my eyebrows and said, “Girls can play football too. And boys can dance.” But those types of statements are problematic beyond their sexist implications — they bear the assumption that my daughter will always identify as a girl. And the fact is, the Gender Free I.D. Coalition is right — she might not.

With that in mind, it's possible that one day, we might move in the direction of all babies being considered gender neutral. If we can accept that only an individual knows their true gender, we can’t presume to assign one at birth or place any expectations on a tiny creature that has only existed for mere minutes, days, or weeks — even years. Waiting for your baby to figure out their gender identity for themselves isn’t silly. It exemplifies compassion for your child, as well as an understanding of where we might be moving as a society.

The bottom line is clear. The more we as parents open ourselves up to various possibilities, the easier it will be for our children to explore their own identities. At the end of the day, we should be giving them the freedom and space to do just that — without judgment, without direction, and without the world telling them what they “should” be.

More Like This
Baby Growth Spurts: When They Happen & What To Expect
When To Stop Swaddling Your Baby: 8 Signs It’s Time To Transition
25 Winter Solstice Baby Names For Your Magical Little One
30 Great Non-Toy Gift Ideas For Kids