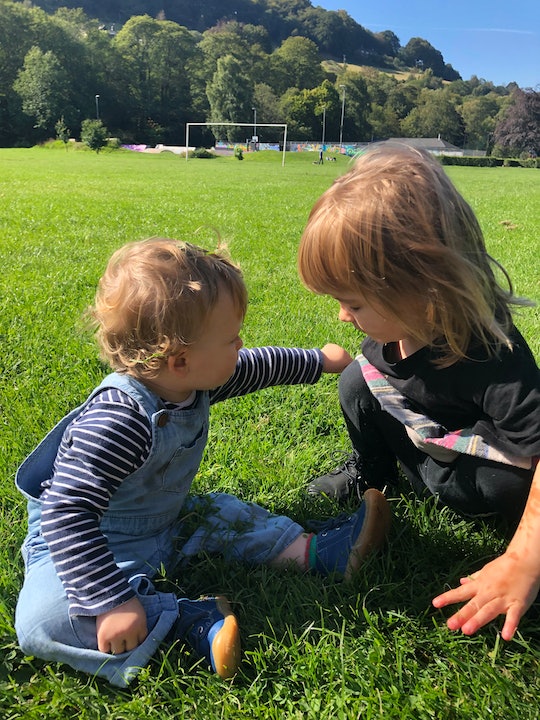 I'm Trying To Preserve My Culture For My Kids, Thousands Of Miles From Home

Growing up between Colombia, land of cities tucked away inside mountains, and the U.S., I used to spend a lot of time thinking about where I'd raise future children. As it happens, I wound up in England, my husband's home country, with our two children, and while I love it, I didn't anticipate how difficult it would be to feel so detached from my roots. How difficult it would be to be the only person in my daughters' immediate, day-to-day lives speaking Spanish, or reading books in Spanish, or playing Carlos Vives and Fanny Lu on YouTube. To be the sole person in charge of preserving our Latinidad. They are only one-quarter Colombian, but it's a quarter that I want them to know, to appreciate, and to enjoy.

In almost every one of the daydreams I had as a younger, childless person, I imagined being surrounded by many different types of people; by many different cultures; by a variety of food and art and smells and music. More specifically still, I figured that, wherever I ended up, it would be somewhere with a strong Latinx community. After all, some of the best times of my own childhood were those during which I felt immersed in my Colombian heritage, either because we were spending months at a time living in Medellin or because groups of my family members and family friends were visiting us in New Jersey.

I grew up listening to Jorge Celedón and vallenato classics. Eventually, to Shakira and Juanes, too. I grew up eating arroz con pollo, bandeja paisa, and tres-leches cake. I was only 2 when Escobar died, but I grew up familiar with the consequences of his empire. I grew to love Aguardiente and Ron Añejo. I grew up seeing bodies like mine celebrated in the artwork of Fernando Botero, even if they weren't necessarily celebrated elsewhere. I grew up in a world of magical realism, and surrounded by vibrant Molas on pillows and dresses and wallets and shawls — an intricate textile technique originating in indigenous Panamanian and Colombian communities. I grew up admiring the emeralds worn by fancy ladies who looked to be going to fancy fiestas.

I hopped between the U.S. and Medellin throughout my childhood, but my heart was always in the latter — in the city of eternal spring. In the land of damn fine coffee and flowers and a crush of loving relatives. In the 18th century summer home owned by an uncle, where dozens of us would pile up onto three-tier bunkbeds and fall asleep to the sounds of the cucarachónes and friendly bats.

As I got older, I admittedly drifted from certain elements of my culture and family of origin — from devout Catholicism, certainly; from perceptions about gender roles and sexuality and beauty standards that are only now, decades later, finally beginning to shift. Still, my life in Colombia, or otherwise surrounded by Hispanic people and Latinx cultures, was characterized by warmth and welcoming and a kind of passion I wanted for my own kids. An experience I assumed I would be able to give them.

But life has a way of dishing out the unexpected.

Much like an arepa de choclo defies one's expectations about how an arepa should be, or look, or taste, sometimes you end up analyzing the trajectory of your own existence, only to find that it's nothing like what you'd once assume it'd be.

After meeting my now-husband in 2011, we spent a lot of time trying to figure out where to settle down. We tried his hometown in Yorkshire for a year while I completed a master's degree. Then it was New York City for a couple of years, after I was offered a full-time job upon graduating from that MA. Then we went on to New Jersey. Then, we found out I was expecting our first daughter.

It is difficult to feel alone in their cultural development.

I knew almost immediately that I wanted to raise her in England. I knew my partner would have more work opportunities here. I knew our cost of living would be sliced by at least half, allowing me to make the move toward freelancing that I'd long been thinking about. I knew we'd have free healthcare. I knew his parents would be amazing sources of emotional and practical support. I suspected that all of this would allow us to build a work/family life balance that felt fulfilling.

I wasn't wrong. But to be so detached from my roots does, indeed, create something of an empty feeling, but what I'm learning it that it's not impossible to hold onto them. I am lucky in that there is a Colombian restaurant only a 30-minute train ride away. When my girls are older, we can plan day trips over to enjoy all of the chicharrón we can eat. I also have tías who I know will teach me to cook certain staples when next we meet; who will teach me the right way to blend some jugo de mora so that it is the perfect consistency.

I am lucky in that Manchester is another 30-minute train ride away in the opposite direction, and that it is the most multicultural city in the country. I am lucky in that, when my daughters are bigger, we can plan a holiday over to Medellin, where so many of my family and friends still live. I can immerse them in the language, in the music, in the food, and in the art that was so vital to my own upbringing. That, I believe, will be so vital to them as they grow.

It is difficult to feel like I'm robbing them of something so beautiful and important.

It is difficult to feel alone in their cultural development (although I have to hand it to their father for his determined efforts in learning and teaching them some entry-level Spanish since our oldest was born). It is difficult to know they won't be surrounded by the joys of Colombian life, as I was at their age. It is difficult to feel like I'm robbing them of something so beautiful and important. Still, I'd like to believe that even if we cannot readily travel to our cities, or be with people who remind us of our culture, there are other outlets for the preservation of heritage.

In this increasingly digital world of ours, we can at least listen to any album at any time, bring up images of any artist's work, or find recipes to the meals that flavored our childhoods. We can order books in any language through the World Wide Web. We can print out pictures and stick them all over the house. We can find ways to hold on, no matter how many miles away from home we actually are. At the end of the day, my daughters also have me — and I will take every opportunity to tell them all about where we come from.