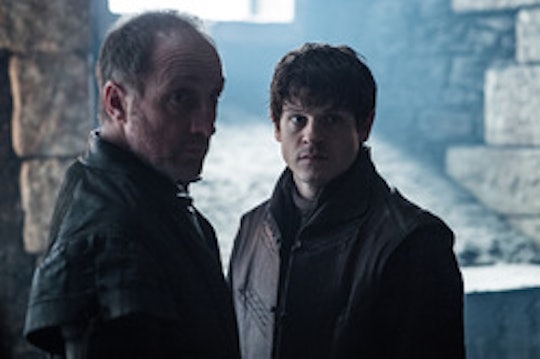 Ramsay Kills His Brother & Walda On ‘Game Of Thrones’ & It's Brutal

There have been plenty of deaths viewers watch through their fingers on Game of Thrones, but you can definitely add Walda Frey and her infant son's to the list. Ramsay kills his brother and Walda on Game of Thrones to secure his position as the Bolton heir.

Of course, "heir" implies that there is someone in the way of Ramsay's path to the throne, and, since he killed his father Roose Bolton just before meeting with Walda and her new baby, Ramsay is actually the head of House Bolton now.

He takes out his father right after learning that Lady Walda has given birth to a son — his worst nightmare, considering that Ramsay Bolton is actually a bastard. Sure, he had technically been legitimized by the crown, but Roose seemed skeptical that Ramsay could successfully get Lady Sansa pregnant and able to produce male offspring. Roose was already banking on the possibility of having a legitimate son, from the get-go, with Lady Frey. It's easy enough to dispose of the bastard son, once he has a "real" one to be his successor.

But right after Roose and Ramsay learn of the newest Baby Bolton, Ramsay swiftly drives a knife through his father's gut, bullying the Maester into sending out notices that Roose has been poisoned by his enemies. Then, Ramsay catches up with Walda and the new baby for one of those unbearable scenes in which we all know exactly what's going to happen, except for how gruesome it's going to be.

Walda tells Ramsay that Lord Bolton sent for her and the baby, asking if he can take them to Roose.

"Of course," Ramsay replies before leading them to — where else? — the kennel.

After getting locked inside with Ramsay and the baby, she asks him where Lord Bolton is, to which Ramsay chillingly replies, "I am Lord Bolton."

Desperate to save her baby and talk her way out of the kennel in any way she can, Walda offers to run away, back to the Riverlands, and never return to Winterfell again.

"Please, Ramsay," she begs as he unlocks the kennel cages one by one. "He's your brother."

"I prefer being an only child," Ramsay remarks simply, before siccing the hounds on her with a single whistle.

So, with the slaughter of Lord Bolton, his wife Walda, and his newborn son Tragically Unnamed Baby Bolton, Ramsay is officially the only Bolton left with any claim to Winterfell. His next targets are, of course, the remaining Starks who threaten his reign. Will Ramsay catch Sansa? She seems to be pretty skilled at the whole escaping from brutal husbands thing, so let's hope Brienne of Tarth can keep her newest charge safe.