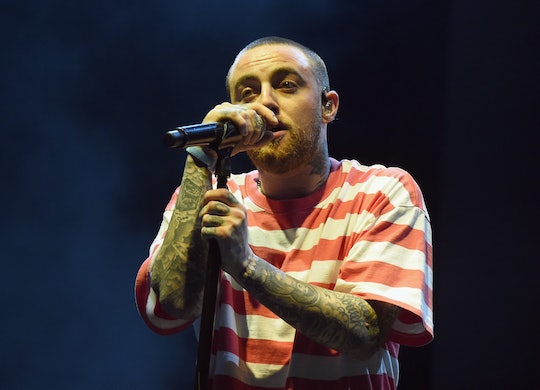 It's difficult to imagine a person dying when they're in their twenties. Horrific, actually, and yet it's something that happens no matter how awful it feels. Ariana Grande's ex-boyfriend Mac Miller died at 26 on Friday, according to a report by TMZ, and it's heartbreaking news for his fans.

Law enforcement officials told the news outlet that the rapper was found dead in his home in the San Fernando Valley of an apparent substance overdose. Paramedics arrived on the scene after reportedly being alerted that there was an issue by a male calling 911. Miller was reportedly pronounced dead at the scene. The Swimming rapper has been having something of a difficult year in the wake of his break-up with longtime girlfriend Arianna Grande four months ago. He has allegedly been struggling with some substance abuse issues, according to a recent interview the rapper gave to Craig Jenkins for Vulture, and was even arrested for a DUI in May. He was reportedly driving close to his home in the San Fernando Valley in California when he hit a power pole. He later admitted that he was driving while intoxicated and paid a $15,000 fine, according to The Fader.

Romper has reached out to a representative for Mac Miller and is awaiting a reply.

Miller and Grande ended their relationship in May, with Grande sharing the news on her Instagram Stories, according to Billboard, writing:

This is one of my best friends in the whole world and favorite people on the planet. I respect and adore him endlessly and am grateful to have him in my life in any form, at all times regardless of how our relationship changes or what the universe holds for each of us!

After Miller's DUI in May, the rapper spoke to Zane Lowe on Beats 1 in July about making mistakes in the public eye, according to People:

I made a stupid mistake. I’m a human being. But it was the best thing that could have happened. Best thing that could have happened. I needed that. I needed to run into that light pole and literally have the whole thing stop. I have people that care about me and fans that love my music and it’s a beautiful relationship with them — people who have been with me through being a 19-year-old wide-eyed kid to being a self-destructive depressed drug user to making love music to all these different stages. Then they see something like that and they worry. So your first reaction is, ‘Let me tell them I’m cool.’

Of course, it's important to remember that Miller was so much more than a person who dated Ariana Grande. He was his own person, his own artist, long before his relationship with Grande. Born in Point Breeze outside Pittsburgh, Pennsylvania in 1992, Miller became something of a young rap prodigy when he was discovered fresh out of Taylor Allderdice High School in 2010, where longtime friend and fellow rapper Wiz Khalifa also went to school.

He taught himself how to play bass, drums, guitar, and piano by the time he was just six years old. He started recording his own music in the fall of 2007 and became interested in composing all different genres of music. He went on to collaborate with and earn the respect of musicians like Chance The Rapper, John Mayer, and J. Cole.

While Mac Miller clearly died far too young, he made a lasting impression on the people who knew him when he was alive. Which is perhaps the best and only thing a person can hope for in this world.