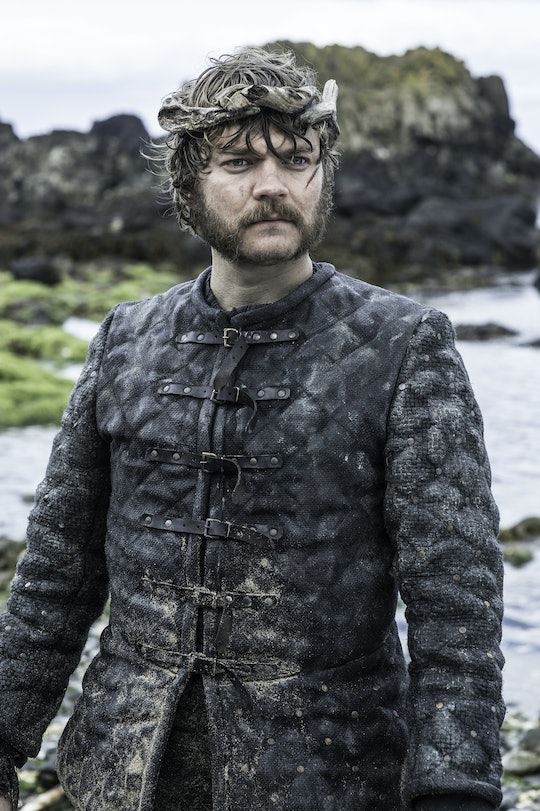 Reactions To Euron's New Look On 'Game Of Thrones' Are Priceless

When Euron Greyjoy returned in "Dragonstone," it was immediately apparent that he had cultivated a brand new look. Gone was the bedraggled ensemble crusty with sea air; gone was driftwood crown presumably purchased on Etsy. Instead Euron was looking on trend, and Twitter took notice. Reactions to Euron's new look on Game of Thrones ranged from positive to negative to simply confused.

While Euron didn't change everything about his appearance (for some reason he felt that his facial hair was simply too integral to part with), the changes he did implement were major. In preparation for his meeting with Cersei, Euron realized he had to do what he could to win her over. He was looking to woo himself a queen, after all. He got a trim, which was a good start, but he didn't stop there. He also picked up a strange, bedazzled blazer.

It was a statement piece for sure, which is maybe what you have to wear when you're trying to get on Cersei's good side. It's clear from her own new look that she appreciates a bit of flair on a structured jacket. Euron and Cersei might be a match made in fashion heaven, which is just one more thing they have in common (the list also includes murdering people and thirsting for power).

Game of Thrones viewers were quick to comment on Euron's makeover. Some were confused by the fact that they suddenly found him attractive, while others couldn't seem to make up their mind whether it was a good thing or a bad thing that he had switched it up from Crusty Pirate to Sexy Pirate.

Still others felt he simply didn't fit with the rest of the characters on Game of Thrones. Twitter user CloneNic suggested that perhaps he had wandered in off the set of another production.

But perhaps Euron's inspiration wasn't fairytale related at all. The sudden influx of musicians into Westeros (hey there, Ed Sheeran) could have led him to add a little rock star flair into his look; maybe he will soon be dropping a single of his own that you can purchase on iTunes. Many, many people basically described Euron's look as Washed Up Band Member:

And, of course, there was the token Kanye reference:

Whatever the reason behind Euron's foray into fashion, you have to applaud a man for test-driving a new look. If it does end up working on Cersei, then Euron can consider his fancy new blazer (and the eyeliner he paired it with) a success. If not, Euron, it might be worth another trip to the mall.