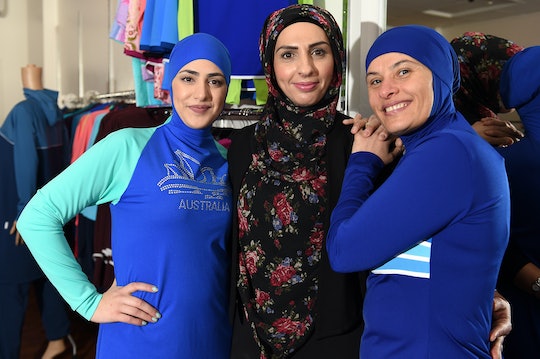 There are some images the world will probably never forget, and the sight of a truck zig-zagging through a crowd of happy revelers in Nice on Bastille Day, killing dozens of people, is obviously one of them. It was a terrible moment in a year of terrible moments in France. How does a country react to this sort of cruelty, this senseless terrorist act that took the lives of so many? Well, here's one clear example of what not to do; approximately 15 towns in the south of France have issued a ban of the burkini, and reactions to the ban have run the gamut of emotions.

The burkini, a swim garment designed to cover a woman's entire body (much like a full wetsuit) and head, was banned as a direct result of the July 14 attack on the Promenade des Anglaise in Nice, according to the town's deputy mayor, Rudy Salles. He told the BBC:

It's a necessity after... the 14th of July on the Promenade des Anglais. It is not the habit and the custom of the Muslims in Nice to wear [clothes] like this on the beach.

According to the Muslim rights group, Collective Against Islamophobia, 16 women have been fined for wearing the burkini since the initial ban was imposed.

Since the banning of the burkini, the creator of the garment, Australian-Lebanese Aheda Zanetti said sales have seen a dramatic increase among non-Muslim women in particular. Since Sunday, her orders have more than tripled, she told Agence France-Presse.

Women are standing together on this. It doesn’t matter what race or religion. The support I’m getting is somehow about empowering women.

Outrage at the French burkini ban has grown stronger since three armed French police officers were photographed forcing a woman to remove her burkini on a Cannes beach on Tuesday.

The woman who was arrested, a 34-year-old mother of two (who only gave her first name, Siam), was wearing leggings, a tunic, and a headscarf. The three police officers forced her to disrobe and wrote her a ticket for not wearing, according to Agence France-Presse, “an outfit respecting good morals and secularism.”

Social media has since been lit up with the utter hypocrisy of forcing women to expose their bodies on French beaches under the pretext of attempting to avoid clothing which “overtly manifests adherence to a religion at a time when France and places of worship are the target of terrorist attacks,” according to a press release by the city of Nice.

As the creator of the burkini, Aheda Zanetti wrote in an opinion piece for The Guardian:

When I invented the burkini in early 2004, it was to give women freedom, not to take it away.

I hope thousands of women in France and around the world buy burkinis. I hope they wear them on the beach, defiantly, knowing they are standing up for other women. Because that's what we women are supposed to do, after all: stand up for each other.